I was lucky enough to get to watch the full lunar eclipse two nights ago; we had clear skies, and the eclipse occurred before I went to bed. Apparently I didn’t stay up late enough to see the “blood moon,” but what I did observe was still a stirring sight, and it was cool to see Mars shining brightly nearby. Here is a photo I took just as the Earth’s shadow was beginning to creep across the face of the moon: 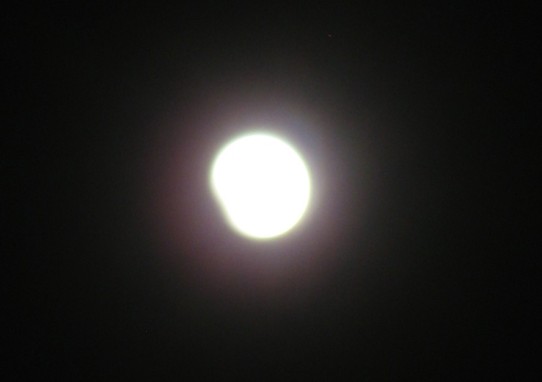 In honor of the lunar eclipse, here are three books, all highly recommended, in which an astronomical event plays an important role:

The Astonishing Life of Octavian Nothing, Traitor to the Nation, Volume I: The Pox Party by M. T. Anderson

The Diviners by Libba Bray

In 1926, Evie O’Neill, a young woman with a supernatural talent, races to find a serial killer terrorizing New York City. The fictional Solomon’s Comet will soon appear in the heavens again, and there may be a connection between the sinister murders and the approaching celestial event…

The Chanters of Tremaris Trilogy by Kate Constable

This might be stretching it a bit, but in this trilogy’s beautifully rendered world, there are three moons. People measure time by counting “turns of the moons,” and different cultures have different names for the various combinations of moon phases, like the Whale’s Mouth or the Goat and Two Kids.