Today marks the beginning of the We Need Diverse Books campaign, an initiative that involves making a splash on social media, engaging in discussion about diversity in children’s and YA literature, and taking action by buying books by and about people from marginalized communities. You can learn more about the campaign in the original Tumblr post here. I first heard about We Need Diverse Books through the wonderful Diversity in YA, and I decided to join in, so here goes: 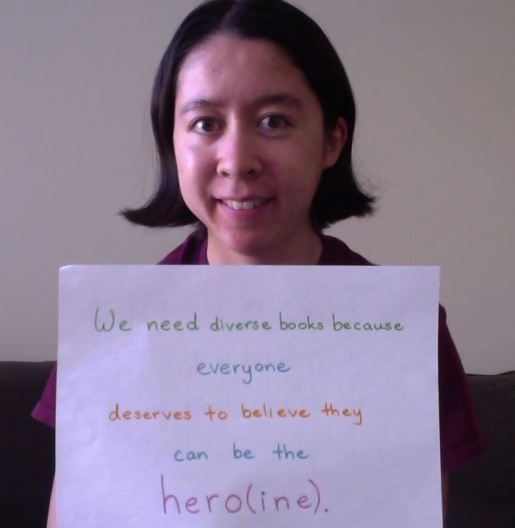 This conversation is not new, but it’s one we can’t stop having. Not when people of color are vastly underrepresented in children’s books and among children’s book authors relative to their numbers in the United States. Not when book covers are being whitewashed in the 21st century. Not when kids and teenagers have trouble finding books featuring characters like them, characters who are disabled or mixed race or queer or working class or…

I think we need books for young people that portray authentically, not stereotypically, characters of all races, ethnicities, religions, socioeconomic backgrounds, body types, sexualities, gender identities, and so on. When children discover characters who are like them in books, they feel recognized and acknowledged and understand that they matter. When children read about characters who are unlike them, they are exposed to the true diversity of the world they live in, and they develop empathy.

I was lucky in that I didn’t grow up feeling like there were no books starring people like me. I read the Little House books and The Chronicles of Narnia and His Dark Materials, but I also had In the Year of the Boar and Jackie Robinson and Yang the Youngest and His Terrible Ear and The Secret Voice of Gina Zhang. I read Laurence Yep’s Golden Mountain Chronicles. I can’t remember ever reading, as a child, a book about a character of mixed European-American and Chinese heritage, except for maybe one, but I wasn’t bothered by it. I don’t actual recall being very aware of race as I devoured books, and I never felt invisible. Like I said, I was lucky, and I was privileged.