I am on vacation in the Land of 10,000 Lakes, and I arrived just in time for Northern Spark 2014. This is an all-night arts festival I’ve attended with friends for the past two years (I mentioned the 2013 festival briefly in my 2013 recap post). The first year I went, it was in Minneapolis, and we spent most of our time around the Stone Arch Bridge over the Mississippi. Last year, it was in St. Paul, in and around the Union Depot railroad station. This year, it was back in Minneapolis, and it coincided with the opening of the Green Line, the new light rail train that connects the Twin Cities’ downtowns. The light rail line was in the midst of construction the whole time I lived in Beth Shalom last year, and whenever I walked down University Avenue to go to the library or to grab a meatball bánh mì, I would see the as yet unused rails and the empty stations and regret the fact that I would be leaving before the trains started running. In celebration of the opening of the Green Line, all Twin Cities buses and trains were free this past weekend–a public transportation fan’s dream!

Saturday was rainy and blustery, so I did not ride the Green Line to St. Paul as I’d hoped. Besides, we were hosting a garden party at home, which ended up being indoors due to the weather.

Some of my mother’s peonies

In the evening, as a thunderstorm rolled through, I took a (free!) bus to downtown Minneapolis and met some friends at the Convention Center for the opening ceremony of Northern Spark. After some taiko drumming and a welcome from Mayor Betsy Hodges, we headed to Orchestra Hall to hear the Minnesota Orchestra, conducted by Courtney Lewis, perform Kevin Puts’s Symphony No. 4. It was my first time in Orchestra Hall since it was renovated, and for the most part it didn’t look that different. It was also my first time hearing the Minnesota Orchestra since the lockout ended. The last time I heard these musicians perform live, they were playing independently as the Musicians of the Minnesota Orchestra. And the last time I heard them at all was in October, in LA, when I listened to Minnesota Public Radio’s live stream of Osmo Vänskä‘s last concert as conductor of the orchestra. Now the lockout is over, and Osmo is back! So it was really meaningful to be back in that familiar hall hearing this orchestra again. The symphony was accompanied by a light show against the cubes embedded in the wall behind the stage. Some of it was rather pretty, but it felt a bit superfluous to me.

After the Minnesota Orchestra’s performance, we prowled around Orchestra Hall and the Convention Center seeing what else there was to see. There was a trebuchet out in the street hurling water balloons containing LED lights in soaring arcs over the pavement. There were some musicians playing unusual instruments (bowed banjo?) in the Convention Center arcade. We dashed through the rain to this seesaw that was supposed to do something light/sound-related, but it was hard to tell what it was doing, exactly, and we were getting wet.

Eventually, we rode the new Green Line a short ways to the East Bank of the University of Minnesota and ducked into the Weisman Art Museum. This is where I knew the local Sacred Harp singers were holding an all-night Northern Spark singing. The people I was with were very good sports about singing with me for most of the hour between midnight and 1 a.m., and it was rather fun to make my reappearance among the Twin Cities singers in the middle of a stormy night. We sang some tunes befitting the circumstances, like The Midnight Cry and Showers of Blessings.

From the Weisman, we hopped from one U building to the next. The Gossip Orchestra was pretty cool, and in Northrop Auditorium we experienced the Fruit Orchestra, in which you hold an alligator clip in one hand and hit pieces of fruit (a banana, a lemon, a lime) with the other to make music. The tomatoes and cherry were in somewhat bad shape by the time we got to the Fruit Orchestra. (It strikes me that there are a lot of orchestras in this post.) Also in Northrop was a slideshow, projected on the wall, of the outlines of all the lakes in Minnesota.

As it approached 2 a.m., we decided we’d had enough of running around in the rain and exploring Northern Spark in wet clothes. For our final adventure of the night, we crossed the Mississippi using this former railroad bridge that I hadn’t known existed (according to Wikipedia, it is Northern Pacific Bridge Number 9) as the wind blew rain in our faces and thunder rumbled overhead.

One last thing! For helping to fund Northern Spark this year, I received this bit of plastic, which, believe it or not, is called a sparker (as are people who attend Northern Spark, apparently–that makes me a Sparker!). 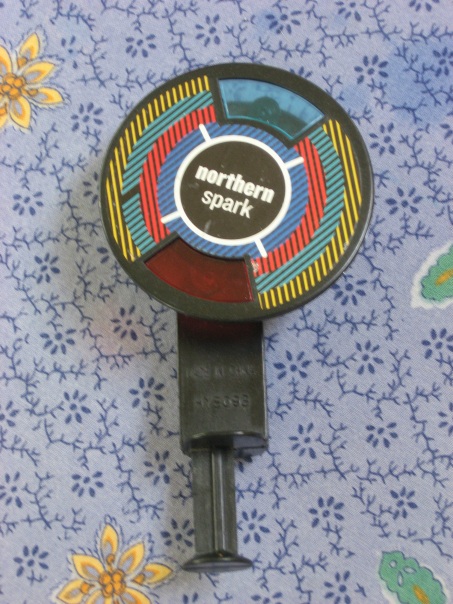 Why is it called a sparker? Because it does this: 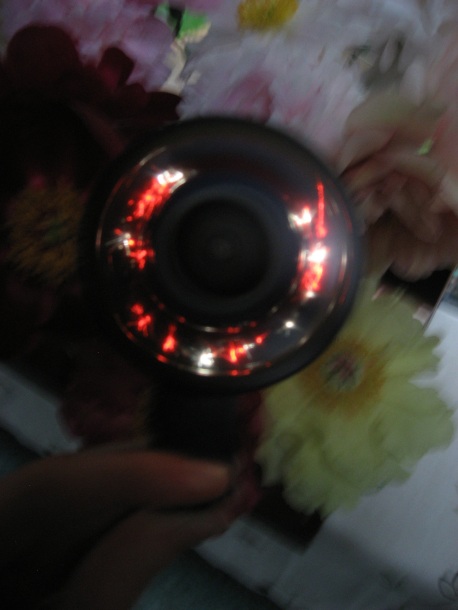