Another year has flown by! As in 2013 and 2014, I am again recapping my adventures of the past twelve months.

In January, I went to the All-California Sacred Harp Convention in San Francisco.

In February, I made pancakes for Shrove Tuesday and fried rice for Chinese New Year.

In March, Datvebis Gundi, the UCLA Georgian chorus, had its first real concert. I wrote a couple of guest posts on music and writing for Paolini.net. I hiked in Joshua Tree National Park and visited the Huntington Library and Botanical Gardens again. Then I went to Eugene, OR for the Annual Conference on African Linguistics, where I gave my first ever conference talk. Instead of staying in a hotel, I camped in the wilds of Oregon with my Field Methods professor. March was a busy month!

Me at 49 Palms at Joshua Tree

In April, I met my editor at the Los Angeles Times Festival of Books, met Rachel Hartman at C2E2, and presented at the Chicago Linguistic Society’s conference at the University of Chicago. Then there was CLS karaoke. All these adventures are recounted here.

Me, a fellow grad student, and my Field Methods professor at Giordano’s after a day at CLS

In May, I was mostly frantically writing my master’s thesis, so there are no pictures.

In June, I bought a violin at a thrift shop, met Jamie Ford at the Mixed Remixed Festival, attended a cello concert at the Mojica Hacienda, and went to England for the first time with my parents.

Me examining the beaky doorway of the Church of St. Mary the Virgin in Iffley

In July, I finished my travels in England and returned to California. At the end of the month, I spent an amazing four days playing traditional music on cello and fiddle at Camp Kiya in the Tehachapi Mountains.

Me performing with the Welsh fiddle class at Camp Kiya

In August, I went home to Minnesota, and my family went canoeing and camping in the Boundary Waters.

Me on an island cliff on Seagull Lake

In September, I went to the Minnesota State Fair and learned two new songs and a dance at a workshop with the Georgian ensemble Zedashe. I also went to the release party for Rebecca Hahn’s second novel, The Shadow Behind the Stars, at Red Balloon Bookshop in St. Paul. Then I returned to Los Angeles for the start of my third year of grad school. I saw the Tuvan throat singing ensemble Huun Huur Tu and the Ukrainian group DakhaBrakha perform at UCLA.

Mooncake for the Mid-Autumn Festival

In October, I must’ve been working very hard on Projects of Great Importance, like my research on Maragoli hiatus resolution, my latest Book 2 revision, and the Lunar French dialect a fellow grad student and I were creating for a conceptual artist (I haven’t talked about this at all, but sometime in the new year I will!). I also crashed that nyckelharpa concert. No pictures, though.

In November, I submitted the “final” draft of Book 2 (copyediting still to come) and turned a Georgian chorus rehearsal into my birthday party, all on the same day! I also filed my master’s thesis, so…I think I have a master’s degree? My colleague and I visited the conceptual artist’s Hollywood studio for further collaboration on the Lunar French project. Then I went home for Thanksgiving, participated in Indies First at Red Balloon Bookshop on Small Business Saturday, and played around with an electric typewriter.

At Hansen Tree Farm in Anoka, the day after Thanksgiving, looking for the perfect Christmas tree

In December, I finished up the fall quarter and returned to Minnesota. I went on a road trip to Decorah, attended a performance of Handel’s Messiah (with participatory Hallelujah chorus!), and started to inventory the boxes of stuff from my grandparents’ house. I found my grandparents’ report cards, yearbooks, theses, diplomas, my great-great-uncle’s baptism certificate, my great-great-aunt’s wedding photo, and much more. It finally snowed properly on Boxing Day, and even more over the last couple of days. 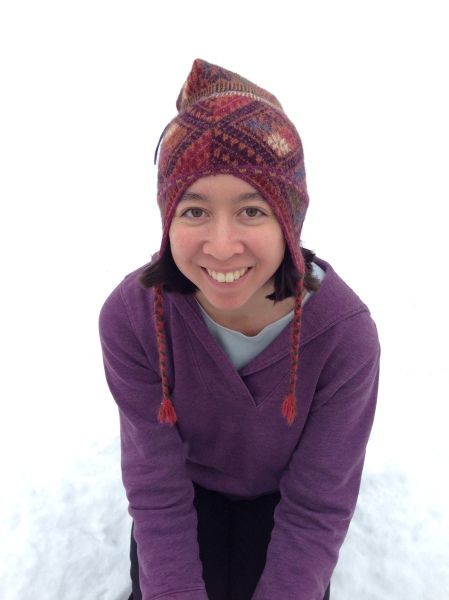