Spring in Los Angeles means the LA Times Festival of Books and the YA festival YALLWEST, both of which I have attended several years in a row. This year, the Festival of Books was the same weekend as the West Coast Conference on Formal Linguistics, which my department was hosting and which I presented at, but I still managed to get to the festival on Sunday. The highlight of my afternoon was when Gayle Forman smiled at me. I was sitting on the grass pretty far back from the YA stage, writing in my journal as the Culture & Belonging panel was wrapping up, when two women approached from behind me. I glanced up, and one of them, wearing a straw hat, glanced down and smiled at me. And I thought, That’s Gayle Forman!

A few weeks later, Isabelle and I returned to Santa Monica High School for YALLWEST. Publisher’s Weekly has a photo essay on this year’s festival, and we’re in the first picture! I’ll bet you can’t find us.

Upon arriving, we visited the Mysterious Galaxy stand, where all the authors’ books were being sold. I’d brought my copy of Spinning so I could get it signed by Tillie Walden, but at the stand I discovered two other comic books by her, I love this part and The End of Summer. After going back and forth a bit, I bought both of them. After one panel, we came back to the booth area for Tillie Walden’s signing. It was lovely to meet her, and she drew illustrations in all my books! You should check out her gorgeous, poignant work.

Next we went to a panel that Tamora Pierce was on. I read tons of Tamora Pierce when I was younger, and I met her and asked her a question once at the Edina Barnes & Noble when I was in eighth grade or so. It was funny walking around the festival and spotting famous YA authors around every corner.

We headed to the choir room for a panel entitled Singularities. The funny thing about YALLWEST is the panel titles are all a bit obscure, and the panelists don’t always know themselves how to interpret them. This was one of those panels. It was moderated by John Corey Whaley. One of the authors, Hilary Reyl, had a novel, Kids Like Us, about a Californian boy on the autism spectrum who winds up in rural France because his mother makes films. He apparently speaks French and goes to French school (like me!) and adores and quotes Proust (not like me!). Another panelist was Ally Condie. She described her middle grade novel Summerlost, and I didn’t recognize it even though I’ve read it and it’s on my Hapa Book List! It didn’t click until she started talking about how she’s from this small town in Utah that has…a Shakespeare festival! Yes, she’s from Cedar City, where we roadtripped last summer. Emily X.R. Pan was also on this panel; she’d been on the YA panel at the LA Times Festival of Books too. More on her anon.

The next panel was the one I’d been most excited for: Friendships! It was in the student art gallery. One of the authors joked early on that “we write novels because we’re not succinct and concise.” Well, that was relatable. I learned that Libba Bray’s best friend is Gayle Forman. Arvin Ahmadi said he sometimes finds himself wondering of his closest friends, What if we had never met?! I found that relatable too. There was plenty of discussion of how friendships can be as close and intense as romantic relationships and how these particular authors for the most part didn’t much like writing toxic friendships. They’d rather write wonderful ones!

Our penultimate panel was the Fantasy/History panel. Emily X.R. Pan was on this one as well, and she finally spoke about something I’d been wondering about. Her debut novel is The Astonishing Color of After, which has been on my radar for a while and which I’m interested in reading. The protagonist, Leigh, is multiracial: her father is white, and her mother is from Taiwan. In the story, after her mother’s death, Leigh goes to Taiwan to meet her maternal grandparents. Emily X.R. Pan is not mixed race, and so I’d wondered why she made Leigh mixed race. On the Fantasy/History panel, she addressed this, saying that while she wasn’t mixed herself, she’d grown up in mostly white communities and felt out of place among Asian(-American?) peers. She’d wanted to write a character who experienced this sense of displacement, so she made Leigh multiracial. While I appreciate the potential similarities of these experiences, I didn’t see why Pan had to make Leigh mixed race to accomplish her goal. She said that she herself had felt out of place (perhaps conflicted about her sense of belonging) as a monoracial Taiwanese-American growing up in largely white communities, so if she wanted to convey that experience, why not write about a character like her? I’m not saying authors should only write characters like themselves. I’m just saying that Pan didn’t need to make Leigh multiracial to do what she wanted, and I also think the multiracial experience is distinct. 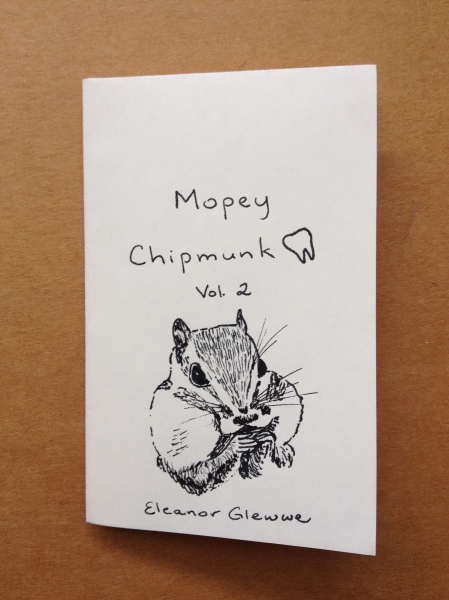 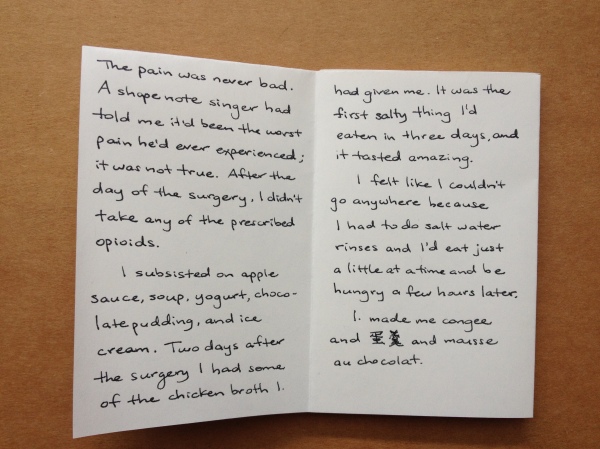 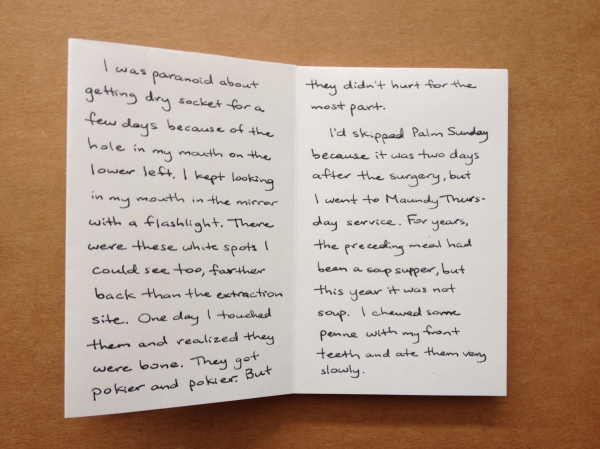 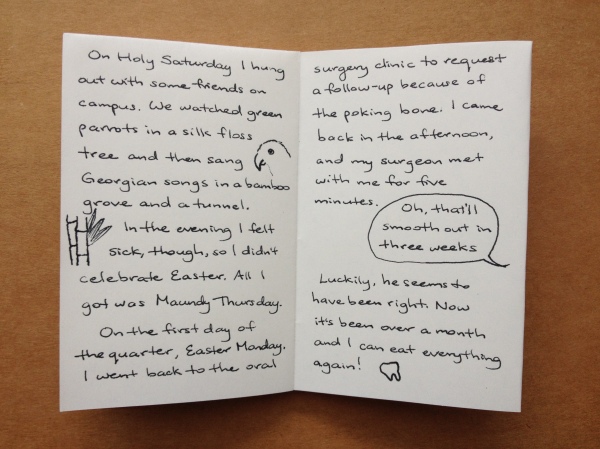 Lately I’ve been busy linguisticking and Being Cultured (I hope). In mid-April, having lived in Los Angeles for almost five years, I finally went to my first LA Philharmonic concert. It was a matinée, and beforehand I had a bowl of ramen at Daikokuya in Little Tokyo. It was the day before they closed for a weeks-long ramen study trip to Japan. After lunch I walked to Disney Hall and found my seat in Orchestra East. An older couple sat beside me, and the wife asked me whether that was an organ behind the stage. I said yes. Then she and her husband began discussing how the audience skewed old, and one of them said young people couldn’t afford to go to the orchestra. (Um, so what was I doing there? But actually I bought my ticket with a gift certificate from my parents–thanks, Mom and Dad!) Then the other said if young people could afford to go to Coachella, they could afford to go to the orchestra.

The first half of the concert was the world premiere of Pollux, by Esa-Pekka Salonen, former conductor of the LA Phil, followed by Edgard Varèse’s Amériques. I enjoyed listening to Pollux, but Amériques sometimes just sounded like…noise. There were fourteen percussionists, one or more of whom played the siren. There was also apparently a lion’s roar, and I was disappointed not to have picked it out. Also somewhere in the first half something seemed to be going on in the oboe section. Was there a reed issue…? It’s vaguely stressful to identify what you think is a musician’s minor crisis on stage during a concert. I didn’t detect any problems in the performance, though.

The second half of the concert, and the reason I’d chosen it, was Shostakovich’s Symphony No. 5, a symphony I played in community orchestra in high school and with my college orchestra. I know it very well. Gustavo Dudamel conducted it without a score, and it was wonderful. After a couple of ovations, Dudamel returned and led the orchestra in an encore. As the concert hall was emptying, the woman next to me asked if I knew the piece, adding that it was so familiar. I said I didn’t know it and didn’t mention that it hadn’t even sounded familiar to me. Later, I found a concert review which identified the encore as “Liebestod” from Wagner’s Tristan und Isolde, which I’m pretty sure I didn’t know.

Two days later, Isabelle and I went to one of The Moth‘s live storytelling events at a nightclub in Silver Lake (I don’t think I’d ever been to a nightclub before, but also, it was only 7:00pm…). The theme of the evening was Mail. Attendees who wanted to tell a story put their names in a tote bag, and ten storytellers were drawn. Each person had five minutes (with a little grace) to tell their story. Three teams of judges were chosen from the audience, and after each story they held up placards with their score on a ten-point scale. It was like the Olympics or something.

Isabelle’s and my favorite story also garnered the highest score and therefore won the night. It was told by a writer from New York. One winter day she dropped her keys, including her mailbox key, through a subway grate. This was disastrous because it was the very day she was expecting to hear back from the second MFA program she had applied to. She had been rejected from the first one, though with a personal e-mail from Colum McCann (!), who told her her work was great and she should keep writing. She, however, believed that if she didn’t get into the other program she would give up on writing. (There was backstory on her feverishly writing weird stories in a corner of her apartment when she couldn’t sleep.) So she picked up her kids from school, and then they returned to the subway grate with bubblegum and magnets and proceeded to fish for the lost keys. And they got them back! And when she opened her mailbox, an acceptance from the MFA program was waiting for her. She told this much better than I just did, which is why she won.

So that was my cultured April. Now our feature presentation: I got my wisdom teeth out (technically two wisdom teeth and two second molars, except they left in one wisdom tooth) at the end of March, just before spring break. I had joked I was going to spend break being a mopey chipmunk. That sounded like a great zine title, which led to this: 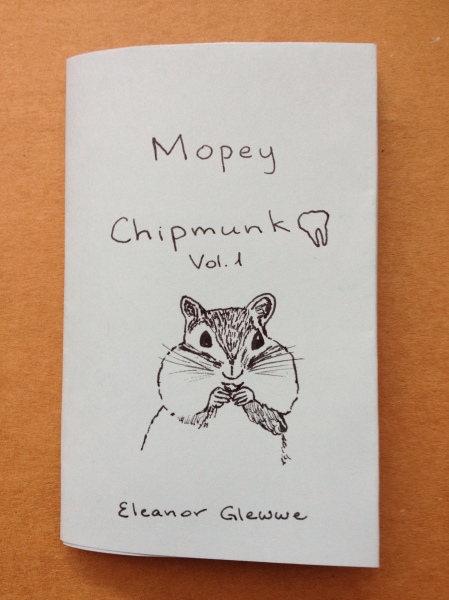 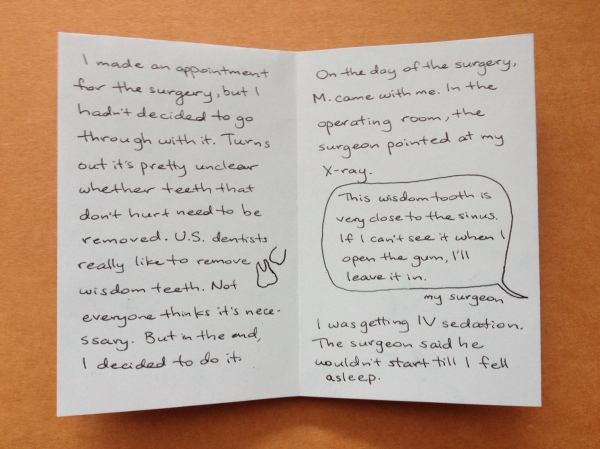 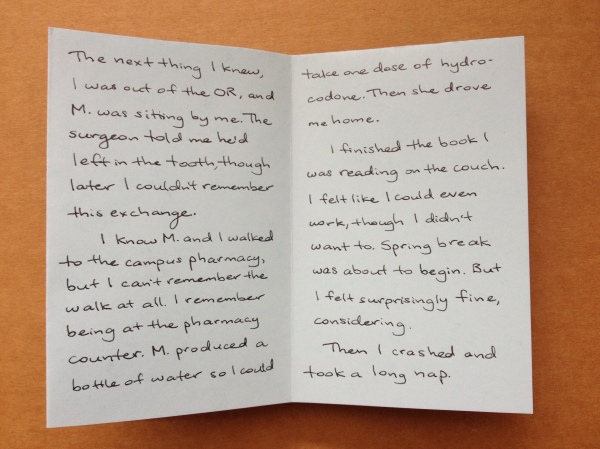 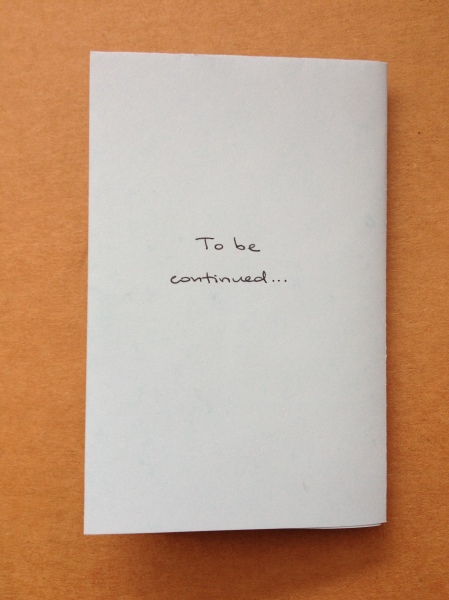