In which I conclude the chronicle of my trip to Lisbon (you can also read Part I).

Meng and I got up bright and early to take the metro and then the train to Belém, farther west along the Tagus. We arrived at Pastéis de Belém, home of the original pastéis, long before the crowds and in time for a lovely breakfast. I had a small cup of thick, rich hot chocolate and most of a plain croissant, and of course we tried the famous pastéis. In terms of quality, it was about the same as the first pastél I’d tried.

We then walked to the Jerónimos Monastery and admired an ornate portal. We noticed a monument on the water and went to check it out. It turned out to be the Monument of the Discoveries, a massive tribute to the Portuguese explorers. From the north, it makes a very tall, narrow sword/cross, and from the sides, it’s supposed to look like a caravel.

The Monument of the Discoveries

We kept walking along the Tagus to the Torre de Belém, which is a sort of watchtower surrounded by water (but just off shore, accessible by a footbridge). After admiring the tower, we walked around Belém a little more before returning to Lisbon.

In the afternoon, I met Isabelle outside the Cemitério dos Prazeres. We wandered around this enormous cemetery, admiring the tombs, many of which were carved with thistles, winged hourglasses (sometimes the wings were bat wings), and skulls and crossbones. There were many cats, some skittish, some happy to be petted. 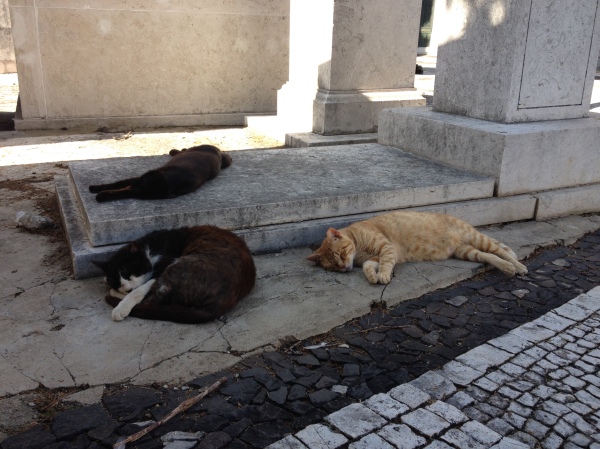 We were resting on a bench when Isabelle realized it was fifteen minutes past closing. We wended our way toward the exit, wondering if we’d been locked in the cemetery but still taking the time to approach a black kitten. When we reached the gates, we found them closed, with us on the inside. However, a guard came out of the gatehouse and used an impressive metal key to open the gates for us.

We took the streetcar downhill and snuck through a restaurant terrace to the top of the Elevador de Santa Justa. From there, we paid to climb a metal spiral staircase to the upper deck, where we took in the views of Lisbon in all directions. 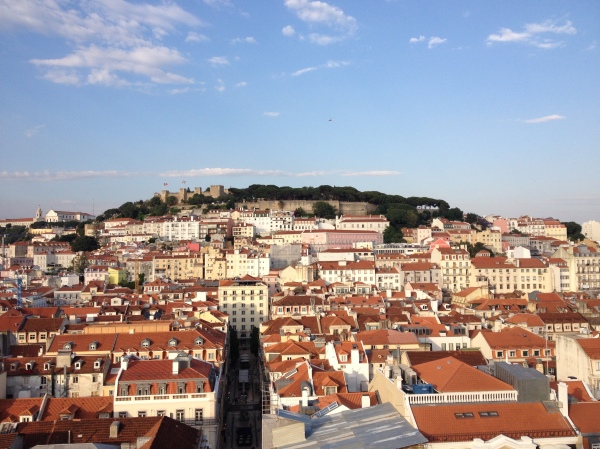 Afterwards, we had dinner at a restaurant where the waiter brought us French menus and spoke to us in French (the establishment appeared to be able to handle five languages). Isabelle had sardines, and I had alheira de Mirandela, a traditional chicken and bread sausage.

After dinner, we went to the Lisbon Under Stars light show in the Ruínas do Carmo, a ruined church with walls and arches but no roof. The show consisted of narration, in Portuguese and English, from the point of view of the church itself, relating significant events of its construction and of Portuguese history; a musical score; projected video of dancers, musicians, and ordinary people; and at times spectacular light projections that lit up the inside walls of the ruins. Some of it was a little weird, but some of it was striking and impressive and beautiful.

Light show in the Ruínas do Carmo

Before catching our flights out of Lisbon, Isabelle and I visited the Oceanário de Lisboa. There was a temporary exhibit called Florestas Submersas/Forests Underwater, by Takashi Amano, which consisted of tanks planted with (apparently) aquatic flora and tropical fish and shrimp. I recognized two kinds of fish I used to have in my aquarium back when I had fish: cardinal tetras and harlequin rasboras. The exhibit was lovely and a little mesmerizing.

Then we visited the whole permanent exhibit, which is structured around a central tank in which sharks, huge rays, ocean sunfish (very weird-looking), and many other fish swam. Visitors pass through different sections organized by geography (Atlantic, Antarctic, Indian, etc.). The highlights were the very vocal penguins (there were terns in this exhibit too!) and the adorable otters. I thought the Oceanário was as good as the Aquarium of the Pacific in Long Beach, except that the latter has seals and sea lions.

From the aquarium, we headed to the airport to fly to Paris.

In the second half of June, I went to LabPhon, a phonetics and phonology conference, in Lisbon. I had never been to Portugal before, and so when I and several other colleagues from my department were accepted, I decided to go to my first international conference. In preparation, I ordered a Portuguese phrasebook from France and proceeded to study European Portuguese extremely halfheartedly for weeks. It didn’t help that the phrasebook’s explanation of Portuguese pronunciation was abominable.

LabPhon itself was good. I presented my poster and had some fulfilling conversations with fellow linguists. It was also a good place to see friends from other universities. That said, I did skip a lot of the conference to explore Lisbon. Here are the highlights:

Isabelle and I met up in the afternoon and walked to the Terreiro do Paço, on the estuary of the Tagus. From there, it was a short walk to the Casa dos Bicos, or House of Beaks, a 16th century house whose façade is covered in pyramid-shaped protrusions reminiscent of beaks. It reminded me a little of the beaky portal of the Church of St. Mary the Virgin in Iffley. 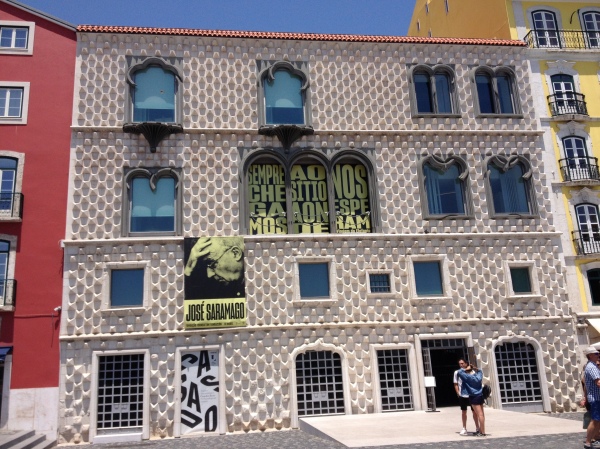 Inside, on the ground floor, there were remnants of the Roman walls, and upstairs was the Fundação José Saramago, the museum of one of my favorite authors! The permanent exhibit featured hundreds of copies of his novels, translated into many languages, including Georgian! There was a lovely account of how after Saramago died, as the airplane carrying his remains took off from the island of Lanzarote, his neighbors read passages of his novels aloud, to bear him away, so to speak. And then when the airplane landed in Portugal, people waved copies of his books to greet it. It was rather moving. We also learned that Saramago’s ashes were buried under the olive tree we’d admired out front before entering the museum.

We then took a break, and I ate my first pastél de nata, bought at a fancy bakery earlier. This pastry is akin to the Chinese egg tart served at dim sum, but it’s thicker and richer. I’d heard of them long ago but never had one, and my first was delicious!

Next we visited the Igreja de Santo António, where mass was being celebrated (in Spanish…?). We went down to the crypt, where a sign indicated that St. Anthony was born HERE. Just up the hill was the Sé de Lisboa, the cathedral. We climbed one of the towers to get to the treasury and found you could walk through a narrow doorway onto the balcony at the back of the sanctuary. It was rather magical when it was just us up there.

In the evening, Meng and I walked around the narrow streets of the Bairro Alto and ate at a restaurant, where we got the bacalhau (salt cod) for two. It was also delicious.

This was the day I presented my poster. After the conference, Meng, Jeremy, and I walked up some very steep streets in what seemed to be a sort of Chinatown. We met up with Adam, Marc, and Jamie, all graduates of our program, and their partners on a bar patio overlooking the Tagus and shared some sangria. Then we went to a restaurant in the Alfama district, where I had rabbit in a plum sauce with couscous.

After a day at the conference, I met up with my friend Andrew and two other Berkeley grad students to visit the Castelo de São Jorge. There were splendid views, as well as peacocks, peahens, and their babies. We had fun climbing around the castle walls.

View from near the castle 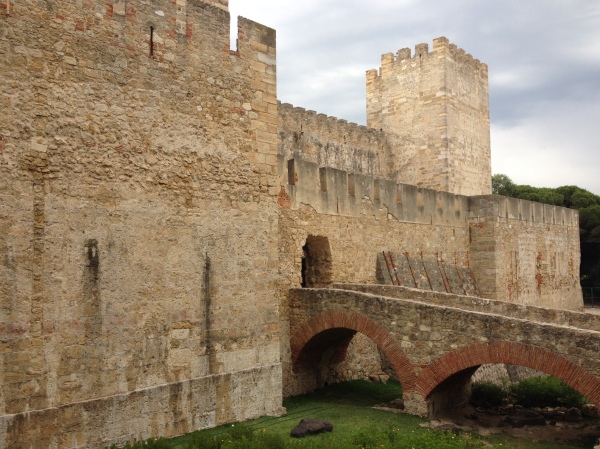 We had dinner at a restaurant downhill from the castle, and I had my second salt cod dish, bacalhau à Brás. It’s sort of like fish with egg and hashbrowns, all mixed together. It was tasty and filling. Two of the Berkeley students had bacalhau com natas, which looked a bit like a lake of cream with bits of fish in it (this is how I learned that nata means ‘cream’).

After dinner, we kept walking downhill, enjoying Lisbon in the evening light of midsummer.

Azulejos in a little square near the cathedral

View from the square

I am woefully behind on blogging about my adventures, but such is the way of things. In the last month or so, besides diligently writing my dissertation, I’ve returned to the aquarium, enjoyed a 4-hour “study session” at the new cat café in my neighborhood, and spent nearly three weeks in Portugal and France. This post, however, harks back to early May, when I was in Minneapolis with Isabelle for the 175th Meeting of the Acoustical Society of America. It was my first phonetics conference. We presented posters in the same session, and I met exactly the linguists I wanted to talk to about my somewhat perplexing study (one of them, from the University of Minnesota, lives practically down the road from my parents!). I also got to see a friend and fellow linguistics Ph.D. student I know from Swarthmore.

After our poster session, Isabelle and I had lunch on Eat Street and then walked over to the Minneapolis Institute of Art to see Power and Beauty in China’s Last Dynasty. This exhibit was meant to weave objects and artwork from the Qing Dynasty into an immersive, sensory experience drawing on elements of theater. It began with ten minutes of meditation in a dark room. It was almost pitch black, but a vase placed high in one corner was illuminated. A piece by John Cage involving what sounded like pencils being dropped onto a stage played in the background. Several of the exhibit rooms included music, some of it rather strange. One of the rooms, featuring a carved wooden throne, had walls painted red with the image of a rather Western-looking dragon and a soundtrack of screams (possibly not all human?). The whole thing was rather unusual, but I liked the art. 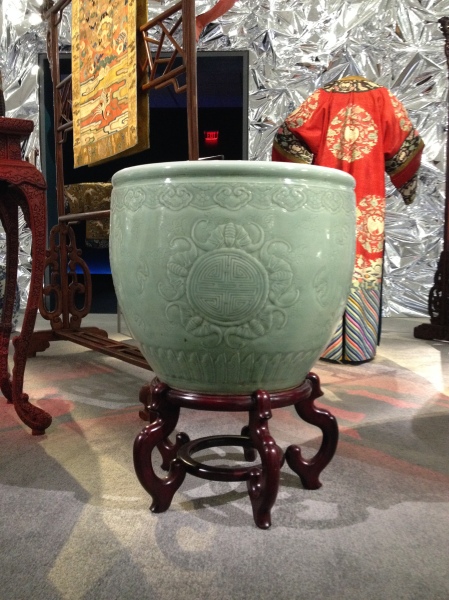 Look at those bats!

After emerging from the Qing Dynasty exhibit, we stumbled upon another temporary exhibit, Boundless Peaks: Ink Paintings by Minol Araki. Araki was a Japanese painter born in China who studied with Chinese painter Zhang Daqian. I was quite taken with his paintings, especially a monumental one covering several walls depicting mountains and trees. 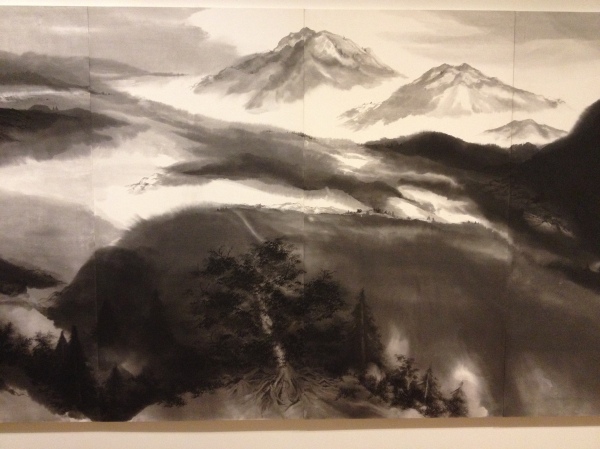 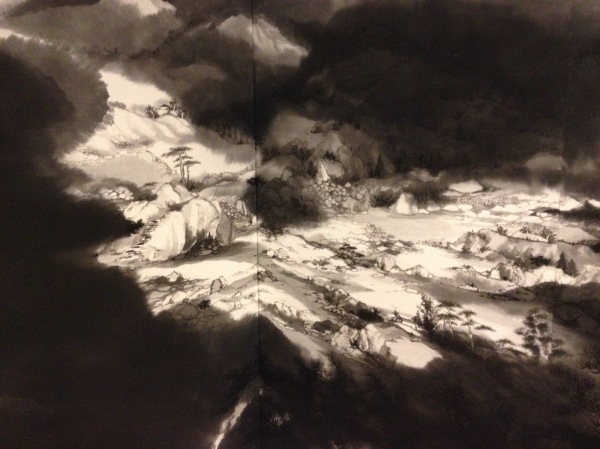