This past weekend I drove up to the Twin Cities for the 30th Annual Minnesota Sacred Harp Convention. I’ve managed to attend this convention a couple of times in grad school–last year with Isabelle, in 2014 when Sparkers came out–thanks to UCLA’s late start to the academic year, but it’s certainly easier to drive up from Iowa than to fly from California. I didn’t know it was the 30th annual singing until I arrived. Turns out the first Minnesota convention took place the year I was born!

The first day, we sang at Olivet Congregational Church in St. Paul, not far from St. Sahag’s, home of my local shape note singing the year I lived in the Summit-University neighborhood. I also vaguely recalled having gone to an English country dance at Olivet UCC that year, and Midge, a fellow singer and dancer and one of the convention’s co-chairs, confirmed that the Playford ball was held there. I led 203 Florida in the morning.

During the breaks, I caught up with Ivy, a fellow linguist now in the Twin Cities. We first met as prospective students at UCLA. I also met an ethnomusicologist who came to the convention from Winnipeg but who lived in Georgia for a year and a half studying the language and the music! Where else do you meet Georgian music singers than at the Sacred Harp convention, I guess. I also “networked” with other Iowa singers; there are a number of us scattered throughout the state. There aren’t any regular singings very close to me, but at least there’s an all-day in the spring to look forward to.

Local singer Claudia had put together a mini-exhibit of six old shape note tunebooks which were on display Saturday morning in the church library. The oldest was a copy of The Easy Instructor from 1816, I believe. There were also two books in German (or bilingual in English and German), printed in Fraktur! One of them was Die Franklin Harmonie. I didn’t know shape note tunebooks in other languages existed; these were apparently used by the Pennsylvania Dutch. As I was looking at the books, another singer noticed my name tag said Grinnell, and she told me she used to hitchhike to Grinnell, passing through Austin, MN, to visit her best friend, who studied at the college.

On Sunday, we sang at The Landing, on the Minnesota River. Last year, I was there with Isabelle. At the end of lunch and at the following break, the ethnomusicologist, Midge and her husband (both Georgian singing aficionados, who’ve visited the country multiple times and who brought Zedashe to the Twin Cities), one other singer, and I attempted to sing a Mravalzhamier we all knew. It was rocky, but it was still lovely to at least try some Georgian polyphony at the convention!

I led 296 Sardinia, in the afternoon. At the end of the day, the co-chairs, as is customary, invited out-of-town singers to invite everyone to major singings in their parts of the country. A singer from Kentucky, who I knew I’d seen before, made such an announcement, and in it he mentioned the opportunity to experience an Old Regular Baptists’ service with lined-out hymnody. Somebody else said that alone was worth the trip. I had never heard of such a thing and wasn’t even sure I’d heard right until I looked it up later. I’m still not totally clear what lined-out hymnody is, but Wikipedia tries to explain. Shape note seems positively mainstream compared to this.

After the convention was over, I wandered around The Landing a little bit, like we had last year. I walked past the schoolhouse and around behind the barn to see if the cows we’d seen last year were in the enclosure, but instead of cows I found three sheep! 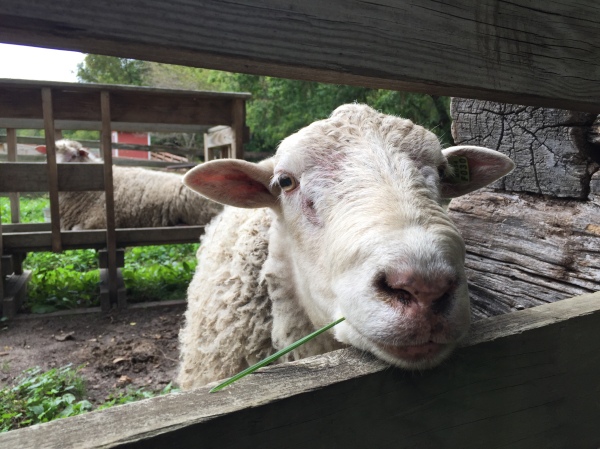