I’ve long enjoyed reading restaurant reviews and recipe articles in The New York Times’ food section, but since much of the world began locking down, there have been no Hungry City reviews of New York’s under-the-radar ethnic food joints or measured evaluations by Pete Wells. Instead, I keep stumbling upon Sam Sifton’s What to Cook newsletter, whose tone of late I feel can be summed up by sometimes you just want to eat meatballs/mac and cheese/insert comfort food here, and you know what, that’s okay, just go ahead and do it. Actually, maybe that goes for all the current food coverage.

Anyway. You thought this post was about music. Sifton has also been appending some non-food recommendations to his newsletters, and on Sunday he asked his readers to please read Alex Ross’s article in The New Yorker on grieving and Brahms. I dutifully clicked on the link (was I procrastinating? I mean, what do you think I was doing reading The New York Times food section in the first place?), and I was intrigued by the subhead about the “enormous sadness” “that glows with understanding” in Brahms. I’m not particularly into Brahms, but as I read the article I had a vague recollection that I liked his first symphony. I started listening to a recording of it, and while I recognized snatches of the first movement, it wasn’t until I got to the fourth movement that I thought, Ah, yes, this. I remembered that grand, noble theme, and I thought I’d studied the symphony in music listening (could we have only paid attention to the fourth movement?!).

While I was taken by Ross’s characterization of Bach as “music’s supreme companion of extreme distress” and Brahms as “the great poet of the ambiguous, in-between, nameless emotions” (including “pervasive wistfulness”), my favorite parts of his article were his quotes from Philip Kennicott’s book Counterpoint: A Memoir of Bach and Mourning (which sounds intriguing too). The first was “I bristle at the idea that music is consoling or has healing power,” and when I read it, I thought, But wait, music is totally consoling! After all, hadn’t I turned to Shostakovich’s Symphony No. 5 when Osmo Vänskä resigned as director of the Minnesota Orchestra during the 2013 musicians’ lockout and on the morning after the 2016 U.S. presidential election?

But the next quote was, “Music, if anything, makes us raw, more susceptible to pain, nostalgia, and memory.” And this resonated. I don’t think it’s either/or: music can both console and make us more vulnerable, awakening and amplifying latent emotions. It can do one or the other and probably both together. Likely there’s some argument to be made about how music consoles precisely by “guid[ing us] through the complexity of [our] feelings,” as Ross put it.

Something made me remember MILCK‘s EP This Is Not The End and how I’d liked it, and so after Brahms’s Symphony No. 1 I went back to listen to it. I’m listening to it as I write this post too. I don’t know enough about Music These Days to know what genre MILCK sings (okay, Wikipedia says “pop,” which is what I would’ve guessed if pressed), but she’s best known for her song “Quiet,” which has a special place in my heart. I’m capricious in my non-classical (and non-folk/trad) musical tastes, and it usually takes special circumstances for me to like something in the pop/rock sphere. In MILCK’s case, those special circumstances exist (I mean, I saw her on a panel). Most of the time, I’d probably say a bit cynically that the reason pop songs seem to speak to your exact feelings and situation is because their lyrics are so vague as to be applicable to practically any situation, but honestly, when it works, it really does work. Some of the songs on This Is Not The End do that for me, and others I like for other reasons (like maybe they remind me of someone else). Maybe something music does is give us space to settle into complex feelings.

I arrived in France with Philip Pullman’s The Secret Commonwealth (a library book), which I read with great pleasure. Pullman is such a good writer. Before the volumes of The Book of Dust, his new trilogy, started coming out, I hadn’t read him in many years, but each time I’ve picked up one of these new books, set in a beloved world, I’ve felt like I’m in such good hands. I remember being twelve or so and finishing His Dark Materials and simply being in awe. I was convinced I would never write something as great.

This isn’t supposed to be a post about The Secret Commonwealth, though. Since exhausting my own reading material, I’ve been raiding Isabelle’s shelves, and I’ve been on a short story collection reading spree. 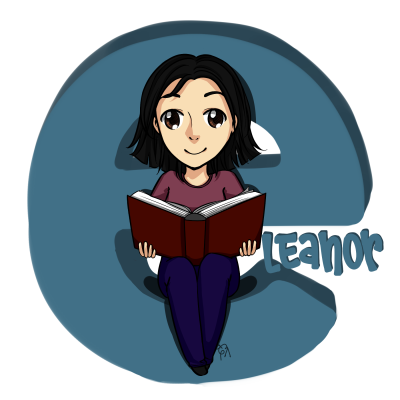 This collection contains eleven short stories, each entitled “The aventure of an X,” where X is a soldier, a crook, a bather, etc. These were translated by William Weaver (whom I read in my translation workshop at Swarthmore), and apparently there were more of them in Italian! All of these adventures are love stories, in a way (sometimes a horrifying way), but I really liked many of them. Calvino writes in what could be painful detail about the minutiae of ordinary life, but he’s such a skillful writer that it’s enjoyable. In that way, he reminds me of José Saramago. Slightly ridiculous predicaments become suspenseful, and throwaway moments of everyday life become moving. “The adventure of a photographer” has thought-provoking remarks about the effects the desire to document one’s life has on actually living it.

This particular book also contained two novellas, Smog, also translated by William Weaver, and A Plunge into Real Estate, translated by D.S. Carne-Ross. I liked these much less than the short stories. They were rather depressing, and no one was a particularly sympathetic character. There were some darkly humorous aspects to the stories, I guess (construction never ends), but that was about all I took from them.

Inside this seafoam green book (the cover art is by Eric Fan, of the Fan brothers), there was a matching promotional bookmark, announcing an event at Magers & Quinn, that I think I picked up for Isabelle ages ago. It turns out Sequoia Nagamatsu went to Grinnell (!) and currently teaches at St. Olaf (!). As the bookmark says, these are stories inspired by Japanese folklore and pop culture. Some of them were of a rather novel (to me) brand of weird, and many of them dealt with a couple’s complicated relationship, sometimes with a child in the picture. My favorites were “The Inn of the Dead’s Orientation for Being a Japanese Ghost,” which was funny and featured a great voice, and “The Passage of Time in the Abyss,” which had a connection to the previous story but was very different in tone. I found it rather beautiful.

In the Forest of Forgetting by Theodora Goss

I had previously read some stories of Theodora Goss’s, and I knew of her novels about “the daughters of literature’s mad scientists,” which intrigued me. I’d also appreciated the references to academia in some of her work, since characters in grad school are relevant to my interests. This book, collecting stories published in Realms of Fantasy, Polyphony, Alchemy, Strange Horizons, and elsewhere, as well as two new stories, was wonderful. One of the stories, “The Rapid Advance of Sorrow,” originally published in Lady Churchill’s Rosebud Wristlet, I had read before, but I no longer know where.

I really like Goss’s style, which strikes me as somehow traditional and old-fashioned in that the writing is lush and lyrical (isn’t beautiful language out-of-fashion in some quarters?), not experimental (for the most part). It feels like straightforward storytelling done very well, so that it’s extremely compelling. I feel like I’m unfairly casting her as unoriginal in some way because she does do interesting things with the boundaries between reality and fantasy. But I’m trying to describe something about her writing here. It’s not cerebral or too demanding of the reader (not that there’s anything wrong with being or not being those things); it revels in beauty and human emotion. And even as her stories feel traditional, they also feel fresh.

I was intrigued by Miss Emily Gray and her eponymous story because I seemed to remember a Miss Emily Gray in Goss’s story in The Starlit Wood. I checked; I was right. Then as I kept reading In the Forest of Forgetting, I came upon this character again in “Conrad,” and then once more in “Lessons with Miss Gray.” I liked how this immortal witch (?) kept making appearances through Goss’s body of work. I wondered about the recurrence of (different) characters named István and Eleanor (never terribly sympathetic, the Eleanors).

My two favorite stories–and they might be my favorites because they’re related–were “The Wings of Meister Wilhelm” and “Lessons with Miss Gray.” The former was especially lovely, and in the latter I was happy to meet certain characters again and learn more about their lives. I also found the point of view in “Lessons with Miss Gray” quite interesting: the story is narrated in the first person plural, that is, “we,” but there is no “I”. Initially I thought I’d find out which girl was the individual narrator of the story, but there isn’t one: all the girls are referred to individually in the third person, but the narrator is still “we.” I liked this device because it gave a sense of a collective character, a sum of the four central girls.

Recently Isabelle decided on a whim to make 餡餅 (xiànbǐng) for one of our confinement lunches. First, we made a dough out of just flour and water. Then we formed the dough into a log, sliced it into discs, and rolled each disc out into a circle, trying to keep the center thicker than the edges. 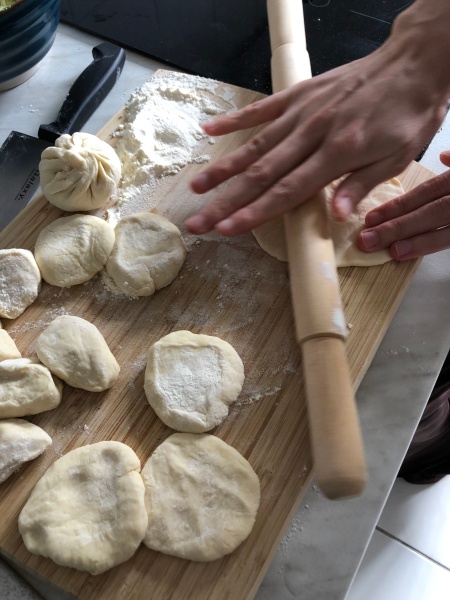 Then we pinched the edges of the wrapper together to form a bao.

Here are a whole bunch. They reminded me of Georgian khinkali.

The bao are smushed, making them 餅 (bǐng), and fried on the stove. 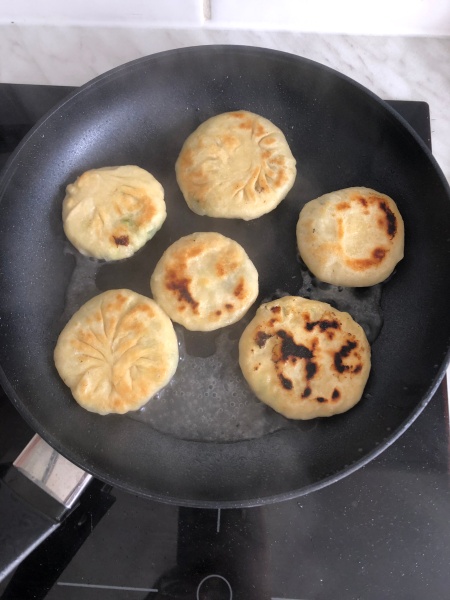 These are strange, scary times, and I have little to say that others aren’t already saying with more thoughtfulness, eloquence, and authority. So I’m not going to wade into those waters. Suffice it to say that I am well, I feel lucky, and I’m currently confined with Isabelle and Olivier.

Back in the early days of the confinement, Isabelle let me make a print from her most recent drypoint plate. Drypoint is the latest printmaking technique she’s picked up (see our earlier adventures in linocut, screenprinting, and Gocco). In drypoint, you carve a design into a plate (Isabelle uses plastic ones), and the ink fills in the grooves. Thus what you carve is what is printed (vs. what you leave uncarved, as in relief printing). Apparently drypoint is etching, but without the acid.

Isabelle carved the plate; I just made a print. This design is called “Springtime frailty” (“Fragilité printanière”). I first smeared black ink onto the plate, filling in all the grooves. Then I used a bit of paper towel to rub away the excess ink. 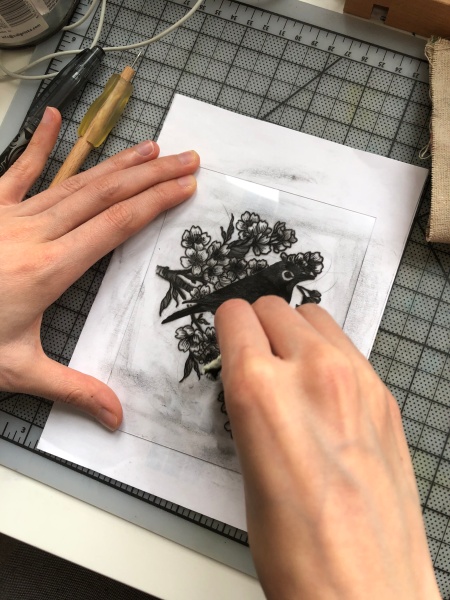 Next I placed the plate ink-down on the paper.

I cranked the plate through Isabelle’s Cuttlebug, which we were using as an improvised press.