Earlier this year, my mother gave me a Great Northern Microgreens Starter Grow Kit she’d bought at the Fulton Farmers Market in Minneapolis. On May Day, I decided to plant my first crop. The kit comes with everything you need (except the water mister), so first I hydrated and crumbled one of the pucks of coco coir growing medium into one of the rectangular black containers. Then I sowed one of the five seed packets; I picked the blue curled kale, for no particular reason. I misted the scattered seeds so they were nicely ensconced in the soil. 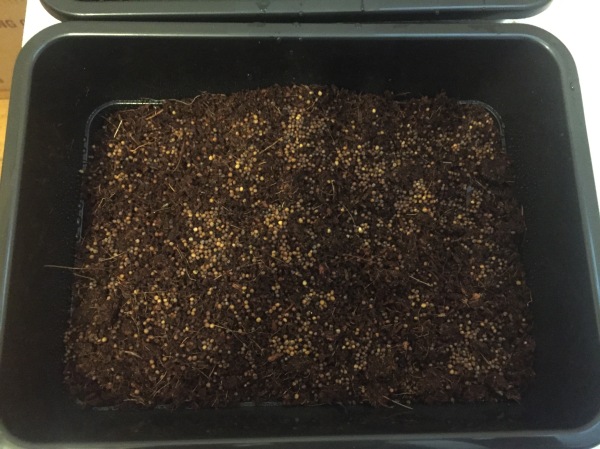 The seeds right after sowing

As instructed, I used the second black container to cover the seeds and misted them once or twice a day. The morning after I planted them, they were already starting to germinate! 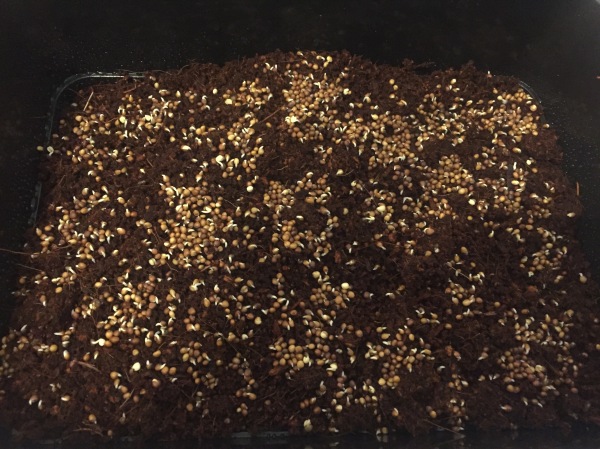 I continued to keep the seeds covered and to mist them. On the second day, germination had progressed, but the little white tendrils emerging from the seeds had white fuzz, like cilia, and I worried it was mold. 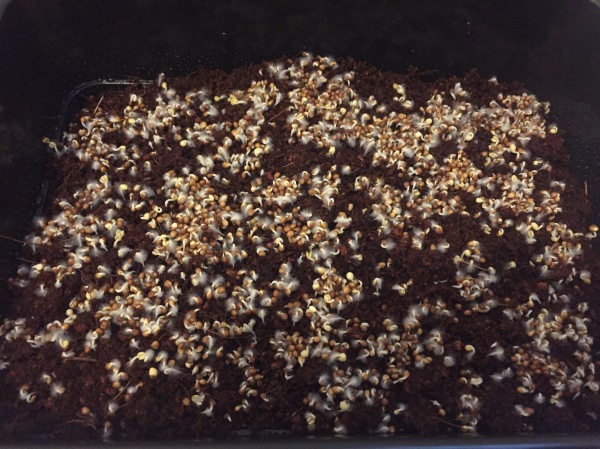 But the sprouts began to stand up, with their little yellow cotyledons. 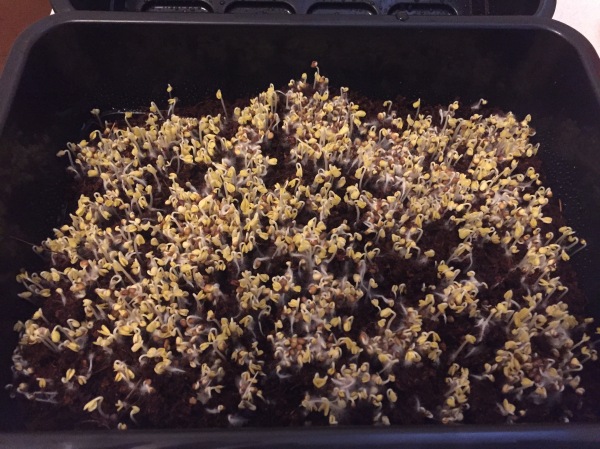 After four days, I removed the top container covering the crop and began to set the growing tray in front of my full-spectrum lamp for ten hours a day. My apartment has extremely limited natural light (only one window), so I needed a grow light. 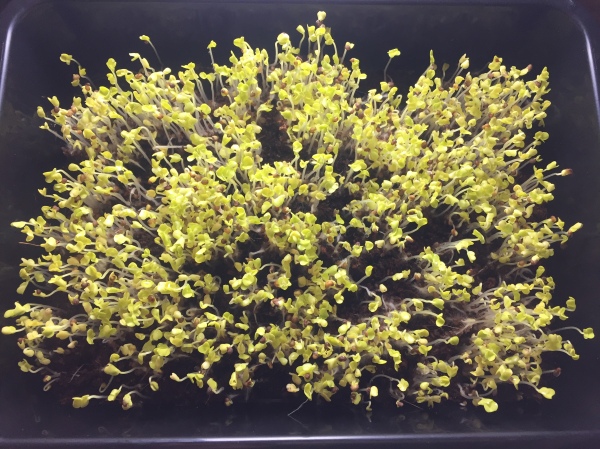 Sprouts drinking in the light and turning chartreuse

Since the lamp was placed on one side of the container, the sprouts would lean toward the light, so I turned the tray several times a day. 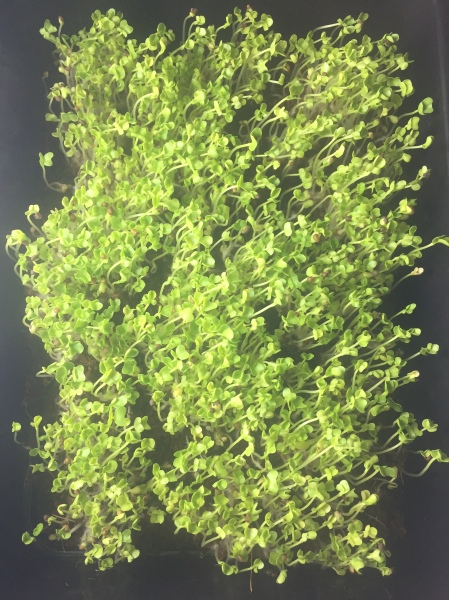 Sprouts reaching for the light and getting greener

As the days passed, the crop grew into a lush carpet of cute microgreens. 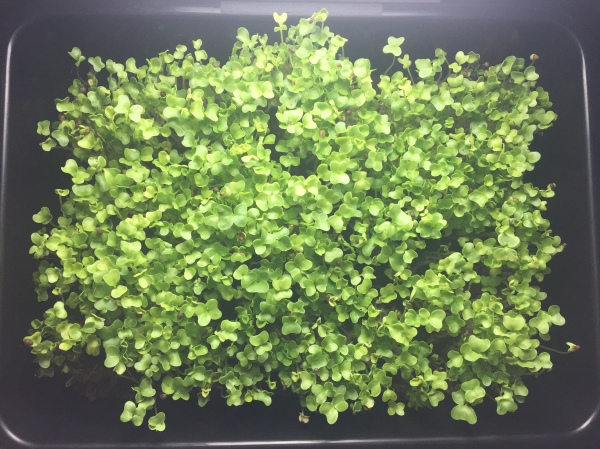 The instructions from the kit said most microgreens were ready to eat after 8-12 days, so on Day 10, when the greens had grown taller, I decided to harvest. 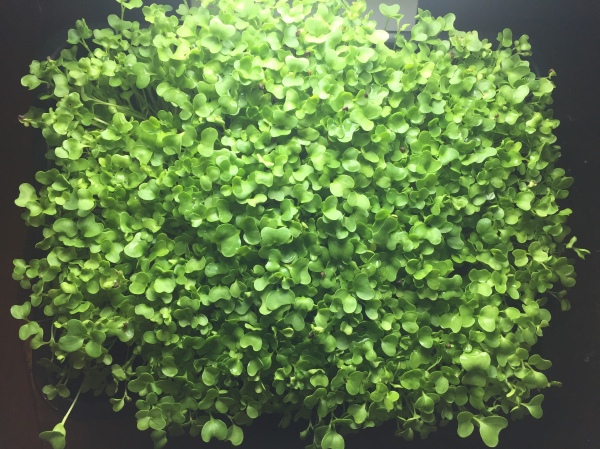 Here they are right before I gave them a “haircut”: 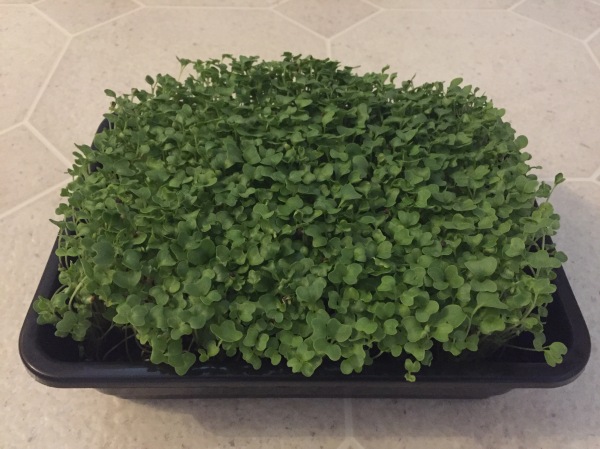 I hadn’t really thought of anything special to do with my homegrown microgreens, so I just threw them on top of this spinach-feta orzo dish I like to make: 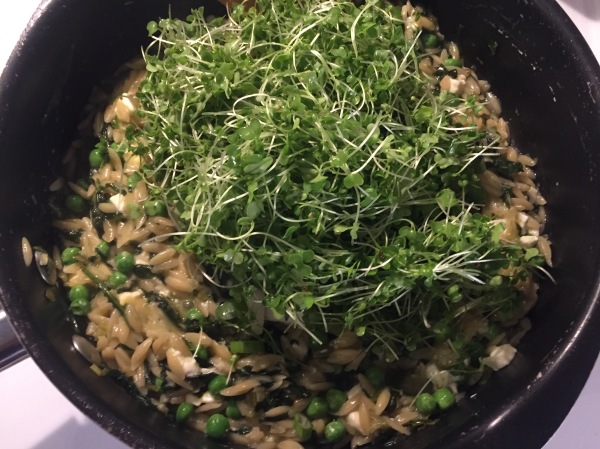 A pile of microgreens on top of orzo cooked with spinach, feta, and peas

I mixed them in, so I’m not sure I tasted the blue curled kale microgreens, but the dish tasted very good this time. And I have four more crops to grow!