On the last Friday in June, I flew from Paris to Toulouse, where I met up with my parents and brother. We visited the Basilique Saint-Sernin, which has an impressive belltower and, inside, a lot of banners about the wonders of pilgrimage. Then we walked around a bit–Toulouse is quite pretty, and it has street signs in Occitan!–and ate dinner at a restaurant where I tried skate for the first time. I was curious after all the rays I’d seen at aquariums lately. We then drove to Mazères, where the American friends who were hosting us live. 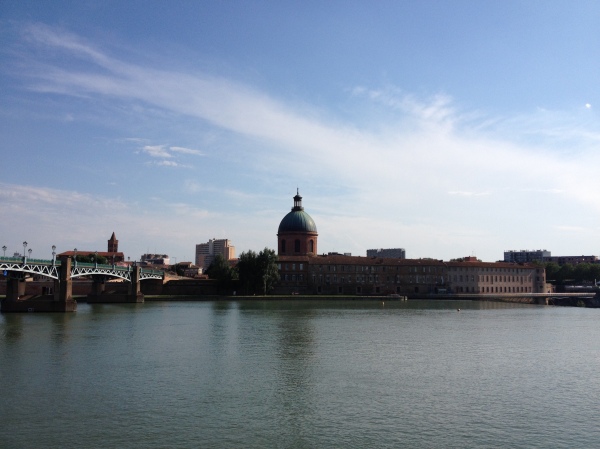 We went to Foix, a town apparently known to all French schoolchildren because of a rhyme that incorporates four French homophones (foie, Foix, foi, fois). Foix has a very well-preserved castle with three towers, which we visited. I saw the bed of Henri IV, who I learned was the last count of Foix (I thought he was from Navarre, which in fact he is–nobility is complicated). 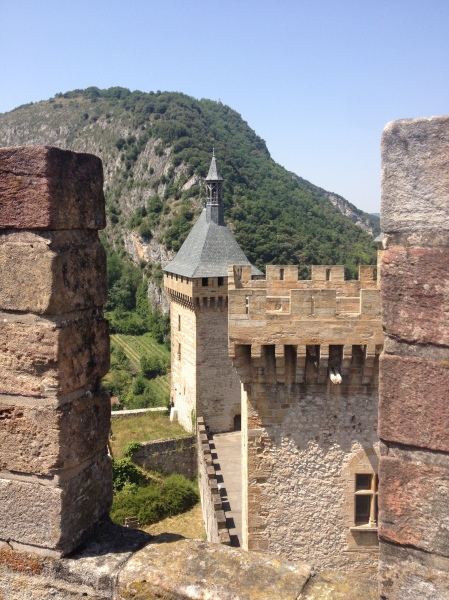 This region of France is Cathar country, and now that Cathar heretics are not an issue (because they got wiped out), there seems to be some Cathar pride. Most of what I knew about the Cathars came from one of my favorite book series, Catherine Jinks’s Pagan Chronicles (seriously, go read them). Specifically the second book, Pagan in Exile, in which the knight Pagan serves, Lord Roland, falls in love with a Cathar woman. It ends badly.

We came down from the castle and walked by the abbey church of St. Volusien as a newlywed couple was coming out into a crowd of well-wishers. The church bells rang. The France-Argentina World Cup match was also going on.

Back in Mazères, we had a leisurely French dinner in the backyard. The neighbor cats came by for morsels of sausage.

We went to Albi, a city whose name was a revelation to me because I had no idea that the term Albigensians referred to a place. Albi has a fortress-like cathedral built to underscore the power, might, and righteousness of the Church of Rome. The outside has a sort of unusual, scalloped perimeter and very tall, imposing brick walls with rows of svelte gargoyles up high. 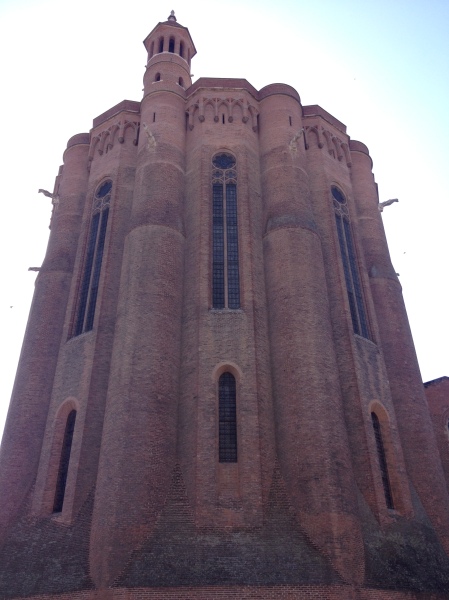 Based on the exterior, I wasn’t expecting the extravagance of the interior. The sectioned ceiling was painted with portraits of saints (including many women!) and biblical scenes on a brilliant blue background. The colors are still jewel-bright even though the paintings, completed in the early 1500s, have never been restored. 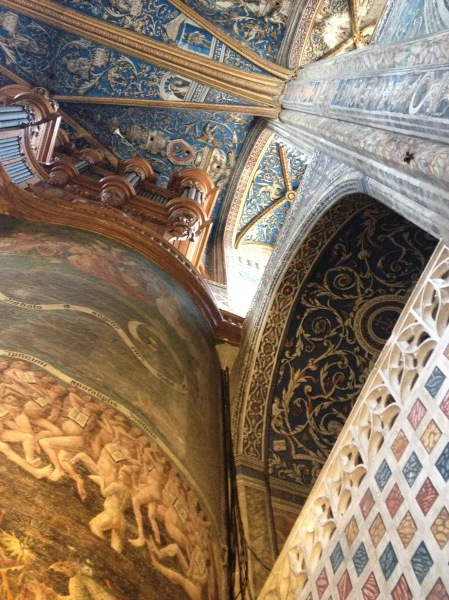 There was also a pipe organ, a painting of the torments of hell, relics of St. Cecilia (for whom the cathedral is named), and the Gothic rood screen, so intricately carved it kind of looks like it’s…dripping. This is one impressive cathedral. 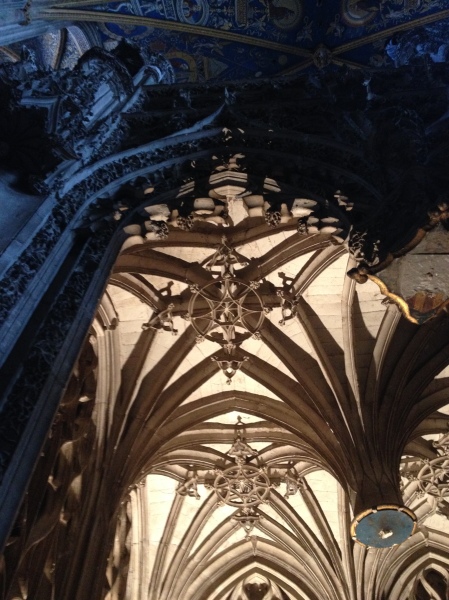 Passing under the rood screen

We also passed through the courtyard of the Toulouse-Lautrec museum (who knew Toulouse-Lautrec was from Albi!) onto a walkway overlooking a manicured garden and the Tarn river. The palais de la Berbie, the former bishop’s palace that now houses the museum, rose behind us. We stopped by a cloister and a very old house and then headed back to Mazères.

We visited Carcassonne, a walled medieval city I’ve known about since I was probably ten or so and had never seen. Inside the church of Saint-Nazaire, we heard the Russian men’s choir (quartet, perhaps) that seems to be in residence there singing. We walked around the cité and made sure to go see the Roman towers on our way out. Crossing the bridge over the Aude on our way back to the car, we saw a furry creature swimming in the green water. I’d like to think it was an otter, but I’m pretty sure it was a muskrat. 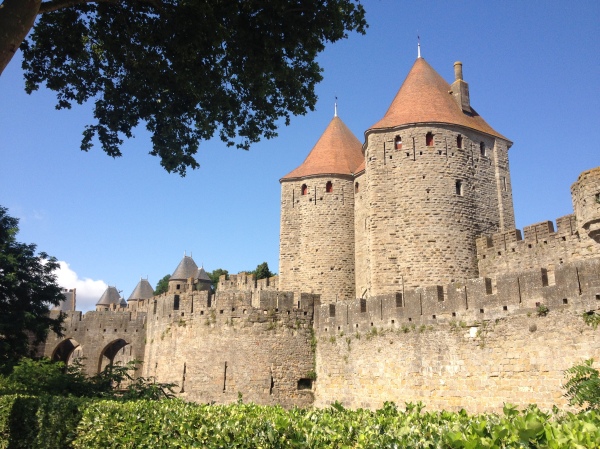 We drove to the village of Fanjeaux, former haunt of St. Dominic, and enjoyed a late lunch at La Table Cathare, where I had confit de canard and my brother had cassoulet. It was generally hot during our trip, so it was usually more tempting to order salads, but in Fanjeaux we got in our heavy southern food. Then we wandered up through the village, finally arriving at the church, which was open. It seemed we were lucky to have found it unlocked. There was an elderly local woman inside who knew everything about the church and was eager to share her knowledge with Francophone American tourists. She knew the names and origins of the artists who had done the paintings, she had herself restored the vestments that were going on display the following week, and she told us that it was possible St. Dominic had prayed in front of a particular statue since it was from the 13th century, but we didn’t really know and one had to be honest about these things. Our host in Mazères had told us a story about an argument between St. Dominic and some Cathars during which the gospel flung into the fire did not burn but flew up and imprinted its letters on a wooden beam. The beam was on display in the church in Fanjeaux, though it had come from elsewhere. Also, in Fanjeaux and elsewhere, I was a little stunned by how much literal treasure a little village church could have just on display near the altar. Traveling in Europe really reminds you how much longer Christianity has been rooted there than in North America.

Leaving the church, we walked to a vantage point from which there were spectacular views of the nearby countryside and the towns, cities, and mountains beyond. It was a little hazy or we might’ve made out the mountains better. 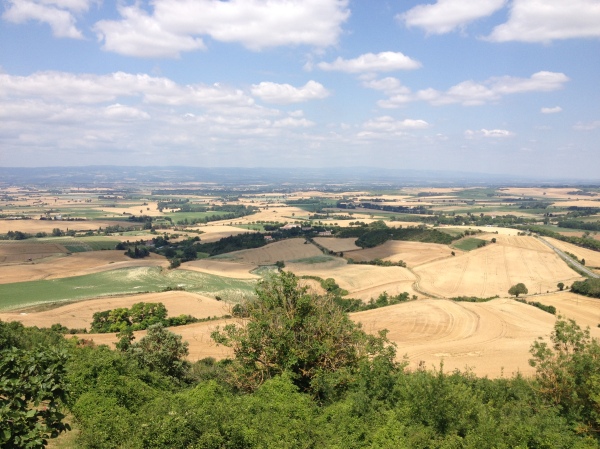 Back in Mazères, I visited the church just to see what it looked like. There was an extremely amusing sign on the door informing visitors that while you might hear the call of the Lord upon entering this place, it would be really surprising if He were to call you on your cellphone, so… In the evening, we had another leisurely dinner outside and watched the hoopoes flying to and from their nest in the wall in the backyard. 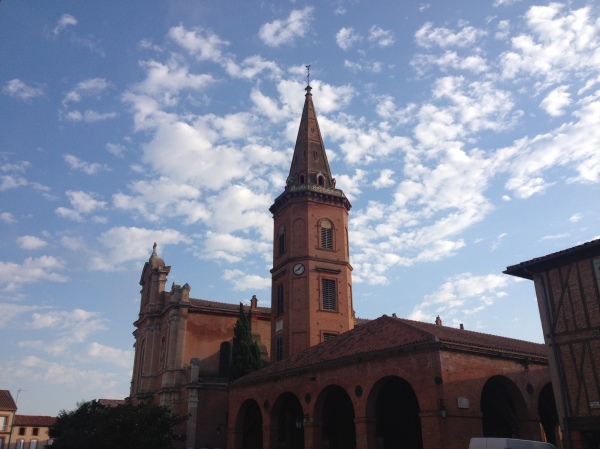