Summer is here! What have I been up to since spring break, besides defending my dissertation? Well, I can safely say I’ve finished my doctorate; I graduate tomorrow! I also went to the LA Times Festival of Books and YALLWEST, which were fun, but I wonder whether I’m starting to get author paneled out… I went on a couple of top secret trips to the Upper Midwest; sooner or later the outcome of those trips is likely to become clear.

In between said trips, Isabelle and I went to a wonderful concert at the William Andrews Clark Memorial Library, which is part of UCLA but is located in the West Adams neighborhood. The Clark houses a rare book and manuscript collection and hosts UCLA’s Center for 17th- & 18th-Century Studies’ chamber music concert series. We had actually been to the library before, for a performance combining piano pieces and personal storytelling. This time, the performers were Agave Baroque, a San Francisco-based ensemble, and the countertenor Reginald Mobley. Apparently it was the first time a singer had ever participated in this concert series.

The Clark Library (check out that theorbo!)

The program was devoted almost exclusively to the extended Bach family. I’m a big Baroque music fan, so I enjoyed the whole concert, but I was especially excited for the penultimate piece, the chaconne “Mein Freund ist mein” from the cantata Meine Freundin, du bist schön by Johann Christoph Bach. I had stumbled upon this piece on Youtube, searching for music by J. C. Bach, as one does, and I loved it. (Amusingly, for the title of the cantata Google Translate gives “my girlfriend you are beautiful.”) I should’ve realized sooner the text was from the Song of Songs. The organist told us the cantata had been composed for a Bach family wedding, but it was a Lutheran wedding, so the piece was in G minor. In any case, it was as wonderful as I’d hoped to hear the chaconne performed live. I was surprised to understand some German I had never caught before, just listening to a recording.

The title given in the program for the final piece, also by J. C. Bach, wasn’t familiar to me. It was “Es ist nun aus mit meinem Leben” (Google Translate: “it’s over with my life now”). The organist said the song was about death, but it was happy (can anyone say shape note?). As soon as Reginald Mobley began to sing, though, I recognized the piece, which I knew as “Welt, gute Nacht.” It’s very beautiful and soothing, and I was delighted to hear it performed live too.

The next evening, I got to see Rachel Hartman (of whom I am unabashedly a fan) and Fran Wilde at Children’s Book World, the bookstores where I held my Los Angeles release parties. I’d enjoyed Fran Wilde’s Updraft, and she was touring for her newest book, an MG novel with a protagonist named Eleanor! She also had a stamp of a witch ball, which she was using in signing books. It was lovely to see Rachel in person for the second time and catch up a little. She was promoting her extraordinary Tess of the Road.

At the end of May, Isabelle and I went to the LA Zine Fest at the historic Helms Bakery in Culver City (the official baker of the 1932 Olympic Games). We discovered some new-to-us zinesters, saw artist Maggie Chiang in the flesh, ran into Jackie Lam, whom we knew from the West LA Burrito Project, and donated some zines to other branches of the LA Public Library.

Speaking of zines and the public library, last Sunday we went back to the zine workshop at the West Los Angeles Regional Library. I kept working on my latest zine, which I hope to finish and reveal soon, and we found that some of our previous zines were now on shelves in the library’s collection!

Last Saturday was the California launch for Wildings at Children’s Book World in Los Angeles! I was lucky enough to be joined by professors and fellow students from my department, friends from my church, my friend Andrew (who came down from Berkeley and served as official photographer again), and even some people I didn’t know (miracle of miracles!). I got to break out Isabelle’s famous stamp for the linguists. 🙂 Here are a few photos, all by Andrew unless otherwise specified:

With Sharon, the owner of Children’s Book World 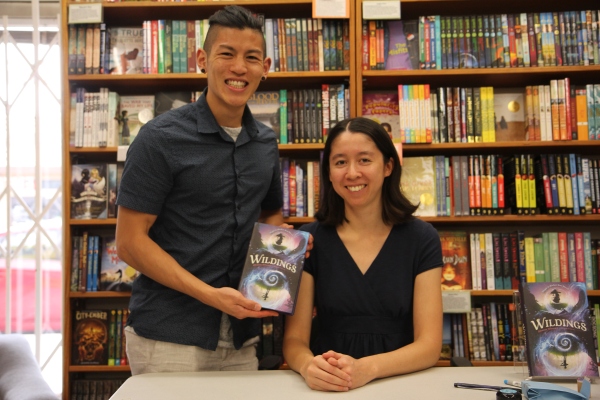 With Andrew (photo by Spencer)

UCLA linguists and Georgian choristers all! ❤

Last Saturday I had a Los Angeles launch for Sparkers at Children’s Book World, a fantastic children’s bookstore not far from UCLA. It was great fun! Though there was no spontaneous singing in Georgian, there were plenty of brownies. Even better, my college friend Andrew was able to come (and serve as official photographer!). I hadn’t seen him since graduation. For a while, we had the exact same major (Linguistics & Languages with French and Chinese), and we studied abroad in Grenoble together. Andrew spent the last two years teaching English in Korea and is now a graduate student in linguistics at Berkeley.

Speaking of linguists, many friends and colleagues from the department came to my party, which was very sweet of them. During the Q & A, my advisor asked me a phonology question. And I got to try out the special stamp one of the first-year grad students carved for me back in the spring when she was a prospie visiting UCLA!

Now for some photos (all taken by Andrew, unless otherwise specified):

Me in front of a wall of books! 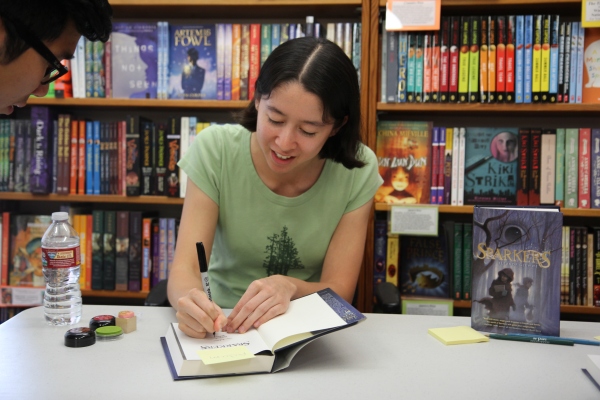 Signing books (note the stamp close at hand, and the ink pads that look like rosin) 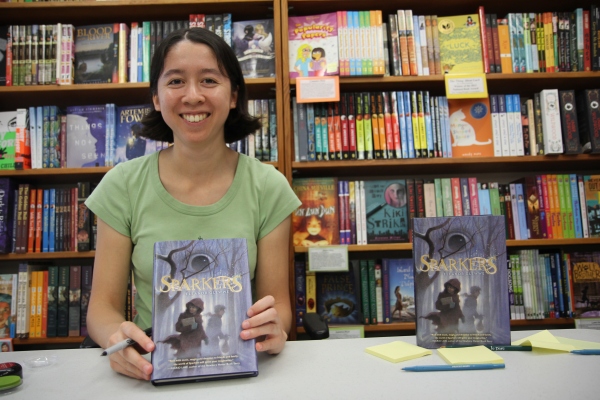 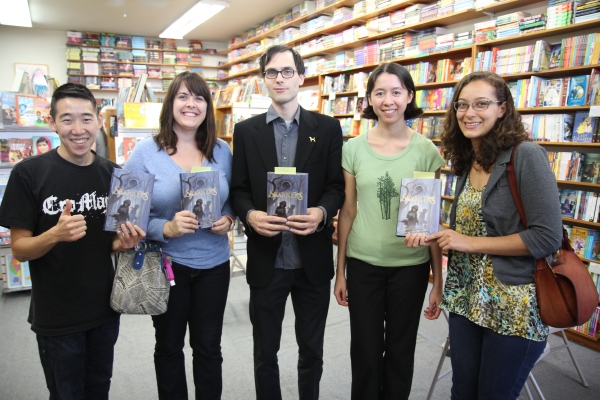 Me and church friends

Me and UCLA linguist friends

I’m glad so many people came out to celebrate with me, and many thanks to Children’s Book World for hosting my California launch!

If you live in or around Los Angeles, I’ll be having a California launch event for Sparkers at Children’s Book World this Saturday, October 25th, at 2:30pm! (Oh, my gosh, I think that was a biscuit conditional!) You’re invited. Yes, you. I will probably be baking brownies for it, and you never know, a Georgian chorus might spontaneously burst into song during the signing. Stranger things have happened. Learn more about the event here.

In the meantime, in the spirit of fall, have some pumpkins! 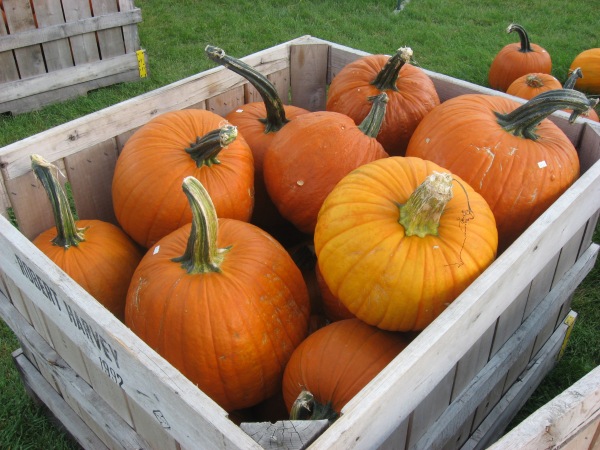