The first Sunday in August, Isabelle, her partner Olivier, and I went to the Long Beach Zine Fest. If you’re not familiar with zines, they’re typically homemade, self-published booklets assembled from folded paper about…absolutely anything you want. Stories, poetry, art, essays, comics, political manifestos… I first encountered the concept in the book Hard Love by Ellen Wittlinger, which I read when I was about thirteen, I think. Since then, I’ve come across zines here and there: my friend Miyuki makes them, I saw them for sale at Boneshaker Books in Minneapolis, Miyuki mailed me some zines (by other people) from her collection when she moved, I saw zines at the LA Times Festival of Books… More recently, I’ve read some of the zines of Yumi Sakugawa.

The zine fest was held in the Museum of Latin American Art in Long Beach. When we arrived, we had to decide whether we wanted to sign up for one of the two remaining afternoon workshops. The first, First Language Zine (“a writing and artmaking and zinemaking workshop to explore the power of multiple tongues [and] the languages of our families”), sounded pretty cool, though I interpreted it as being about using your heritage language in your zines and I don’t actually have a heritage language (well, I suppose I sort of have written Chinese). The second was a basics of zinemaking workshop, and all three of us decided to sign up.

We took a look at the Luis Tapia exhibit and then headed into the big room where the zinesters were tabling. There was a lot of ground to cover. We wandered the booths together, took a break for lunch under the bougainvillea at the edge of the back parking lot, and then split up for more browsing.

There was a zine that had caught my eye earlier at Oatmeal Press’s booth. It was entitled “Messy Bits: An Essay on Grief & Queer Friendship.” There’d been nobody at the booth at the time, so after lunch I checked back a couple of times until someone was there. It turned out to be Claire Stringer, the author of the zine, so I bought a copy and asked her to sign it for me! It’s a lovely, lyrical, at times melancholy but also hopeful zine.

The next thing I couldn’t resist was a small, folded-but-not-stapled zine entitled “A Handy Guide to the Things Not to Say and the Reasons Not to Say Them.” #2 is “So, why aren’t you dating someone?” and the answer includes “maybe…they just want to adopt 5 cats and eat pizza.” It’s actual good advice in a cute and funny package, and on the last page there are some suggestions for better questions to ask people.

I arrived at the table of Christina Tran, the zinester who was running (perhaps at that very moment, since she wasn’t at her booth) the First Language Zine workshop. This table had an interactive activity: there were two box-envelopes of cards, one labeled Leave a Note and the other labeled Take a Note. There was also a small zine called “Dear Daughter: A Zine Fest Letter Exchange” that was a compilation of notes from a previous zine fest. I leafed through the compilation and decided to get it. Then I wrote my own note, which the person at Christina’s table photographed before I slipped it into the Take a Note box. I took a note from the middle of the stack for myself. Like all the cards, it was printed with Dear Daughter, and inside the printed speech bubble someone had written, “This, too, shall pass. ♥” I’ll take it. Later, Isabelle and I both read the whole collection of previous Dear Daughter notes, and we agreed the best one was a very long one that began, “For you there will be:” and included “hidden passages in small town libraries,” the loyalty of bookstore cats,” “bridges of words over snow-covered hills,” “enemies redeemed as friends,” and “forever friendships,” among other delightful things.

Isabelle and Olivier had gone to explore the rest of the museum, and I walked through the galleries too. I was happy to see a couple of works by Wifredo Lam, a Cuban artist whose artwork I had first encountered at an exhibit about him and Aimé Césaire in Paris in 2011.

Around 3 o’clock, we went into the art classroom where the workshop was. It was led by Aima Rosa of frijolerx press. We sat at round tables covered in brown paper, and there were markers, pens, and pencils scattered around. Aima Rosa gave a little introduction to zinemaking and answered a few questions. Then she taught us how to make a very simple zine by folding a sheet of paper in half three times and making a single cut. The result is a booklet with eight pages, including the front and back covers. She invited us to make a zine on the theme of self-love. She said there’s plenty of stuff in the world that makes people, especially marginalized people, feel bad about themselves so it’s important to remember to love yourself and think about what you love about yourself.

I decided to give it a try, though I spent a while figuring out what approach to take and then struggled to come up with things to put into my zine. Turns out it’s actually kind of difficult to come up with nice things to say about yourself, whether it’s because you can’t think of things you like about yourself or because it feels self-centered or like bragging or because of any number of other things. In the end, I was happy enough with how my zine turned out, and Isabelle said I should post the whole thing, so here you go. It was fun to make, and I’d like to make more zines someday. 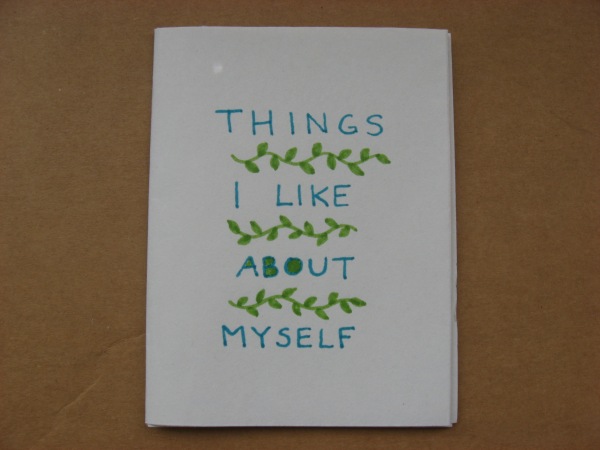 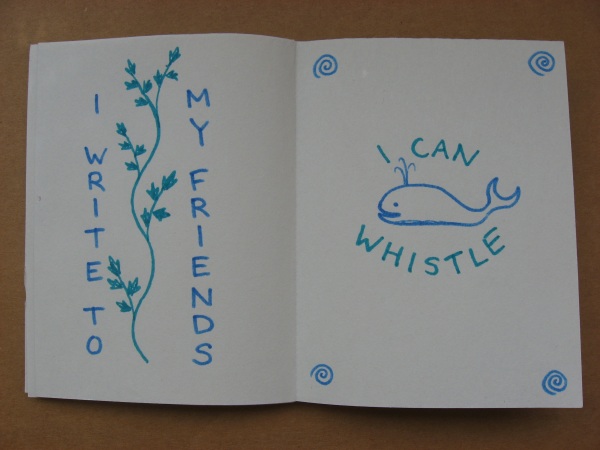 After the workshop, we walked around Long Beach a little bit. We found the mural Yoskay Yamamoto did on the temporary walls surrounding the city hall/library construction site. It was pretty and whimsical, and in the yellow section I found a wug, the adorable bird mascot of linguistics! 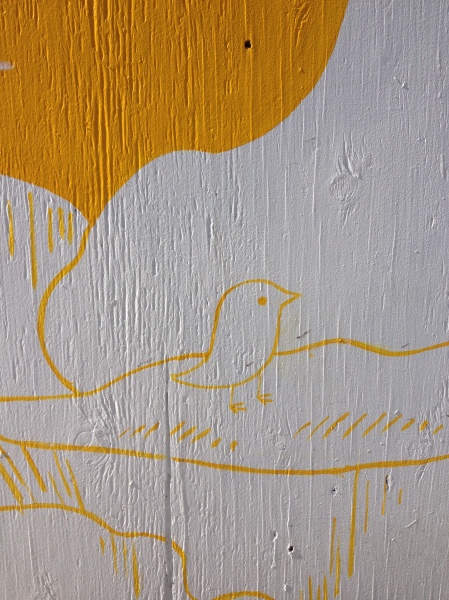 After admiring the mural, we rode the train back to Los Angeles, reading our newly purchased zines.