I draw a (possibly pedantic) distinction between my favorite authors and the authors of my favorite books. Some authors in the latter category are Philip Pullman (His Dark Materials), J. K. Rowling (Harry Potter), Catherine Jinks (the Pagan Chronicles), Cornelia Funke (Inkheart), and Lemony Snicket (A Series of Unfortunate Events). I like each of them for a particular book or series they wrote, but I haven’t necessarily sought out their other works. When I count someone among my favorite authors, though, it means I will read anything they write and I have gone out of my way to try to read their entire oeuvre. By this definition, I have just three favorite authors. I actually discovered all of them thanks to required high school reading, so hooray for our curriculum, without which I might never have stumbled upon them! In chronological order, I give you…

Our summer reading book before 10th grade was Davita’s Harp, by Chaim Potok. This novel tells the story of Ilana Davita Chandal, a girl growing up in New York City in the 1930s and 40s. Her Jewish mother and Gentile father are radical activists. After her father is killed in Spain during the Civil War, Ilana becomes deeply drawn to Jewish practice. The book chronicles her political, religious, and literary explorations as well as the changes in her family life. I loved Davita’s Harp. It was one of only a handful of books I brought with me when I first went away to college. I’ve read about eight of Potok’s books now. His most famous novel is The Chosen, about a Hasidic boy and an Orthodox boy in Brooklyn who meet after the former hits the other in the eye with a baseball during a heated game. Their relationship is one of the most beautiful friendships I have ever read. Potok’s novels opened my eyes to the richness of Judaism, especially it’s tradition of study. (I guess this shows I like my religion academic?) He makes textual interpretation so exciting. I’m not sure anyone else could make a rabbinical ordination exam (in The Promise) so riveting and suspenseful.

One of the books I had to read the summer before my senior year of high school was José Saramago’s All The Names, translated from the Portuguese. I remember liking it, and my copy has copious margin notes I made in it that summer, but I don’t quite remember when or why I sought out more Saramago. I’ve now read sixteen of his books (mostly translated by either Margaret Jull Costa or Giovanni Pontiero), and he died in 2010, so his body of work is complete. Some of my favorite novels of his are The Stone Raft (in which Iberia breaks off of Europe), Blindness (which was made into a movie not that long ago, though I haven’t seen it), and Baltasar and Blimunda. And The Gospel According to Jesus Christ, a powerful and subversive book which I’ve reread once and would eagerly reread again. I can’t quite describe what I find so compelling about Saramago’s fiction. He has a distinctive and unmistakable voice (even in translation), but that’s true of all three of these authors. He often starts from a bizarre or fantastical premise (like Iberia breaking off of Europe or an election in which most of the populace casts blank ballots) and then plumbs the lives of ordinary people caught up in these events. I don’t know, his books are just addicting.

During my senior year of high school, we read Orhan Pamuk’s Snow (translated from the Turkish by Maureen Freely) in World Literature. I remember reading way ahead of the class schedule because the book was so good I couldn’t put it down. (It didn’t hurt that it was about, well, snow; I’ve already mentioned this novel as one of my favorite snow books.) Snow remains my favorite Pamuk novel, but I’ve read all his other novels which have been translated into English, as well as his memoir, Istanbul: Memories and the City, which I read while visiting Istanbul in February 2013. A lot of Pamuk’s characters have an almost painful level of self-awareness that I find appealing for some reason.

Pamuk is the only writer on this list whom I’ve seen in real life. In October 2009, I visited my friend in Boston during my fall break. At the time, Pamuk was the Norton Professor of Poetry at Harvard, and he was giving the Norton Lectures, one of which occurred during my visit. I heard him talk in a theater on Harvard’s campus. I really wanted his autograph, but I was afraid to approach him, and I also didn’t have anything (like a book) for him to sign. So I just kind of hovered as he talked to other people, and then when he left the theater I sort of followed him and whoever he was with across Harvard Yard for a ways… I mean, that’s not creepy at all, right? The funny thing is, a day or two later, walking around Cambridge, I came upon one of those used book sales where someone leaves a table of books out on the sidewalk and a box for you to put your money in. There was a copy of Snow in the collection, so I bought it (the copy I’d read in high school belonged to the school). Too late for the author’s autograph, alas! But it’s still special because I acquired it more or less on the same occasion that I saw Orhan Pamuk speak.

By now, you might be thinking, Hmmm, her favorite authors are all men. That has not escaped my notice. I take it as a sign that I have more reading to do!

I’ve been suffering from snow envy this week. The Twin Cities just got snow, and Swarthmore just got snow, but there is a sad dearth of it here in southern California.

I love snow. The way it glitters under the cold winter sun. The way it settles on evergreen boughs and caps fence posts and frosts every leafless branch with white. The serpentine way it blows across a frozen pond. I love the blueness of snowy evenings and the way falling snow makes the world quiet. 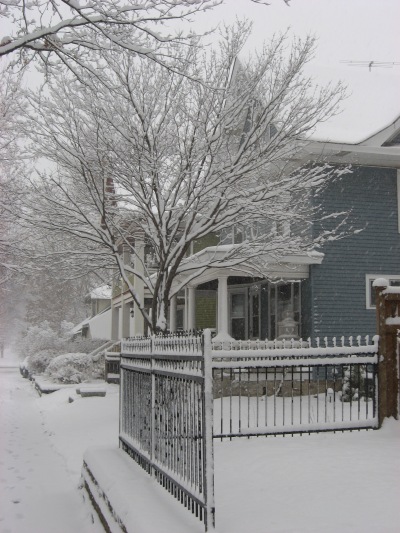 Sparkers is set in wintertime, and there are a few lovely snowfalls in it. I was musing the other day about the books I think of when I think of snow. I mean books that are made richly atmospheric by snow, books in which snow is almost a character. Here are the three that came to mind:

The Lion, the Witch, and the Wardrobe by C. S. Lewis: I know, I know, the snow represents the power of the White Witch over Narnia (“always winter and never Christmas” and all that), but I love it when Lucy pushes her way through the fur coats in the wardrobe and finds herself in a snowy wood at night. And Pauline Baynes’ illustrations of the Lantern Waste in the snow and of Lucy and Mr. Tumnus traipsing through the snow-bedecked trees are a bonus.

Snow by Orhan Pamuk, translated by Maureen Freely: I’m a big Orhan Pamuk fan, and this is my favorite of his novels (it was also my introduction to Pamuk, in 12th grade World Literature). Against a backdrop of ever-falling snow, the melancholy poet Ka frequents a sheikh, boys from the religious high school, a theatre troupe, and a radical in hiding, all as a coup unfolds in the snowed-in city of Kars. (Also: this book always reminds me of the time I stealthily followed Orhan Pamuk across Harvard Yard…) 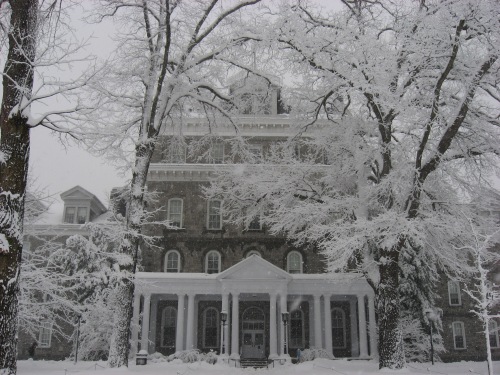 The Snowstorm by Beryl Netherclift: This was one of my mother’s old Weekly Reader books, and it completely captured my imagination when I was a kid. Three English children sent to stay with their Great-aunt Amethyst in an old house called Farthingales. A snowstorm (that is, a snow globe) that bends time. Secret passageways and lost family treasures. And then, when a real snowstorm hits and Aunt Amethyst fails to return from her errand to town, the children find themselves snowed in alone… This book is why the name Faraday will always have a mysterious, enchanting quality to me; why I know of the poet John Drinkwater (“At the top of the house the apples are laid in rows…”); and how I first heard of Bovril and Ovaltine.

What are your favorite snow books?