First off, 中秋節快樂! Happy Mid-Autumn Festival! I can’t believe I only discovered my (new) favorite Chinese bakery in LA Chinatown in what might be my last year here.

In mid-September, I went to New York City to present at the Annual Meeting on Phonology. Shortly before my trip, I realized it would be my first time on the East Coast since I graduated from Swarthmore, which seemed unbelievable. It was my first time in New York City (not counting layovers) since the fall of 2008. I stayed on the Upper West Side with a family friend, her son, and their two cats. It was a weekend filled with meetings and reunions with linguists and friends from Swarthmore, the intersection of which is not insignificant.

But first, on Friday morning, I met my agent in person for the first time! I figured I should take advantage of being in the capital of the publishing industry. I got to visit Writers House and see where all my e-mails, manuscripts, and envelopes go.

After meeting my agent, I had lunch with my friend Eugenia, who had also studied linguistics (and folk danced!) at Swarthmore. We had taken a translation workshop together, and she’s now a professional freelance translator. We correspond by snail mail and had discovered we’d be in New York City the same weekend (neither of us lives on the East Coast), and luckily our schedules aligned.

I finally made my way to NYU, where my conference was being held. There I found my friend Chris, another Swarthmore linguist (and shape note singer, surprise, surprise), now at Yale, whom I hadn’t seen since I’d graduated. Chris and I had taken Field Methods together. We were both glad to see each other again.

The conference was great. I ran into many graduate students from other schools whom I’d met when we were prospective students together, or when I’d hosted them when they’d visited UCLA, or at past conferences. It’s always nice to see friendly faces and have a chance to catch up in person. I also saw (and sometimes even spoke to!) Famous Linguists (often East Coast ones) I hadn’t met before. There were interesting talks and posters.

On Saturday evening, after the conference reception, I discovered completely serendipitously that my friend Leland, yet another Swarthmore linguist, now at UMass Amherst, was also in New York City. The conference was crawling with his colleagues, but I had had no expectation that he would be attending (and indeed he was in New York for entirely unrelated reasons). We made plans to meet up on Sunday.

I gave my talk on Sunday morning, I think to my largest conference audience ever, and after catching up with another fellow grad student over slices of pizza in Washington Square Park, I headed to the Strand to meet Leland.

I had never been to the Strand before, and I was duly impressed. Leland and I wandered very slowly through the SFF section, half catching up, half discussing books. Then we nipped up to Children’s for a bit before returning downstairs to pick up the books we wanted to buy. I got Ada Palmer’s Too Like the Lightning, which I am currently reading and enjoying (lots of worldbuilding to sink my teeth into).

After leaving the Strand, we almost slipped into the Organ Meditation at Grace Church, then changed our minds and just went to get ice cream.

On Monday morning, before I had to head to the airport, I took a walk in Central Park. I chose trails somewhat at random in the Ramble and eventually hit the lake, where I witnessed this charming tableau:

Ducks and turtles living in harmony!

I’d been focused entirely on the reptiles and waterfowl on the submerged rock, but suddenly something in the tree on shore beside me caught my eye. For a moment, I thought a duck was perched in the tree; this struck me as unusual, and I wanted to take a picture. But then I realized it was not a duck but something far more interesting! 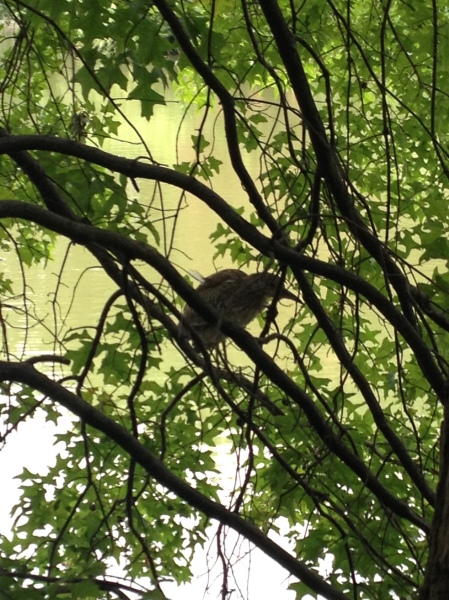 The bird’s shape reminded me of a night heron, but its plumage was totally different from that of the black-crowned night herons I’d seen in Minnesota. I didn’t figure it out until I got back to Los Angeles, but I think this is a black-crowned night heron–just a female one! Anyway, I stared at the poor bird for a long time and kept trying, mostly in vain, to take a decent picture of her. I think she was watching me too.